Australia: 10,000 lightning strikes light up the state of Victoria 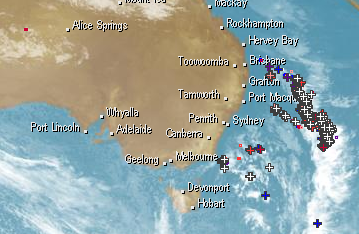 As autumn draws to an end, another front swept over Victoria over the weekend bringing more rain and blustery conditions. Along with this, a band of thunderstorms that a one point stretched from Nhill to Apollo Bay, generated a total of just over 10,000 lightning strikes across the state.

As the front moved eastwards it delivered healthy amounts of rainfall to southern and central parts of the state, with 16.2mm recorded in just under 2 hours at Lara and 16mm in 3 hours at Ballarat. Eastern parts of Victoria saw lighter falls and as the front began to weaken and rain became more patchy.

Behind the front, a colder airmass will see temperatures drop a couple of degrees for some parts today, with conditions looking to stay on the chilly side for the last few days of autumn. Over the next couple of days, more showers and the odd thunderstorm are a risk for parts of Victoria before things look to brighten up towards the end of the week, ready for the start of winter.

**Please note this same front that produced these thunderstorms over southern Australia is now lying out in the Tasman Sea and will cross New Zealand overnight Tuesday/early Wednesday as a much weaker front. There is some risk of a few isolated thunderstorms from Taranaki to Northland and east to Coromandel Peninsula as this front crosses over – but with the front running into high pressure it’s not expected to behave in the same way as it did when it crossed Victoria – WeatherWatch.co.nz