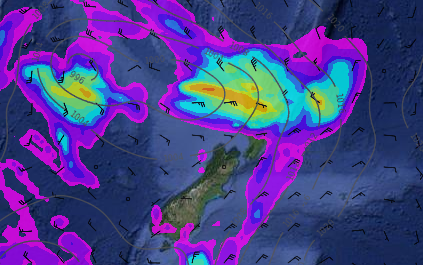 Updated 5:18pm — There aren’t many parts of the country that often receive set in rain for over 24 hours. Fiordland and the West Coast are no strangers to days of relentless rain (they also get days of pure sun). Further north, however, rain tends to move through much faster – and sunnier days are more limited.

The big difference is that the West Coast has the Southern Alps to block the rain clouds.

When you head north to Auckland the city becomes as narrow as just a kilometre or so in places and is surrounded by two entirely separate bodies of water, the Tasman Sea and the Pacific Ocean. With no tall blocking ranges rain clouds tend to pass through quickly.

Which is why over 30 hours of rain in our largest city is unusual – and why more rain for the next several hours or so will make this one of the wettest 48 hour periods the city has had this year as far as total hours with precipitation.

There is one main difference between Auckland’s set in rain and what the West Coast gets – today the rain is fairly patchy and light, not at the levels we see further south. Heavier downpours are about now – and this evening – but does ease back to drizzle and dry spells tonight.

So why is Auckland so wet at the moment?
A few reasons – low pressure in the Tasman Sea, an area of instability coming out of central and eastern Australia towards the North Island and a sub-tropical northerly airflow coming down over northern New Zealand… all of this is combining to produce a slow moving band of rain which is tracking sideways – this sideways movement keeps the rain feeding along over Auckland and other North Island regions with the sub-tropical airflow helping feed this rain today (see our animation here).

We used to get days of heavy orographic rain in Paekakariki, and I miss it. The constant lower pressure meant non stop wind, but that was normal for here. I look forward to a decent Westerly gale as it means “weather normal.” The weather still hasn’t come right since El Nino with high pressure all the time. It is like the highs have changed and they are are too high pressure now, nasty things. Could do with a constant Westerly flow over the country, and to be completely rid of any high pressure Northerly directions. The weather is so strange at present, especially with the Southerlies being weak throughout winter, which is extremely rare for us. While very cold the last polar SE was not winter-strong by our standards, which was great. I hope Spring is normal with plenty of gales and rain; it has been an overly-warm and droughty season since 2012 now.