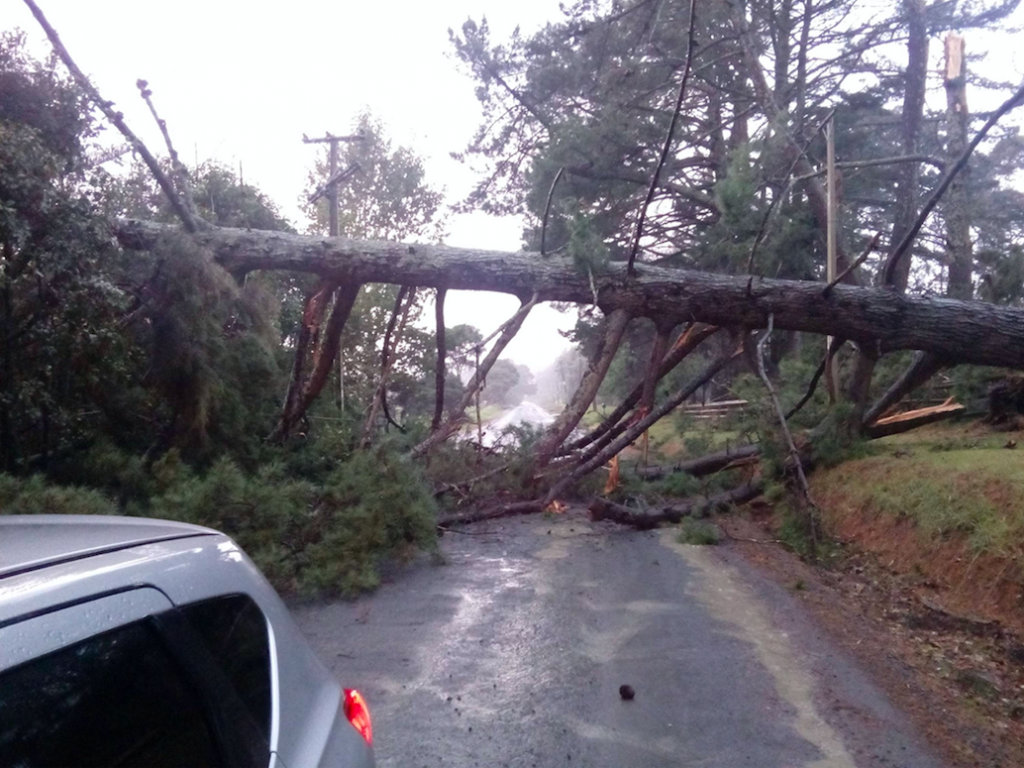 A frightening moment for a Vector crew as a massive tree came crashing down next to them just moments after repairing downed lines has prompted calls for Aucklanders to better understand their responsibilities of owning trees near power lines.

With the big power outage still affecting thousands of people in both urban and rural Auckland the clean up and repair effort is shedding light on what just went wrong this time.

As we wrote on Sunday once winds reach a certain wind speed there are some parts of our infrastructure that simply cannot withstand the forces. In this case trees, something we as humans don’t have much control over, didn’t stand up to the forces. Falling trees = damage to buildings, cars and of course the power lines and power poles that supply electricity.

WeatherWatch.co.nz remains in close contact with Vector and this past weekend their CEO shared with us some frightening experiences for their crews working tirelessly to reconnect everyone in the region who lost power (and therefore water in many rural areas too). “One crew had just finished a big job repairing a downed line when a massive tree came down right next to them. This tree was big and old and shouldn’t have been there in the first place” Vector CEO Simon MacKenzie told us. Across the Auckland region the widespread power cuts – which have been worst in the western and north western sides of the region – were caused by many trees growing too close to power lines. 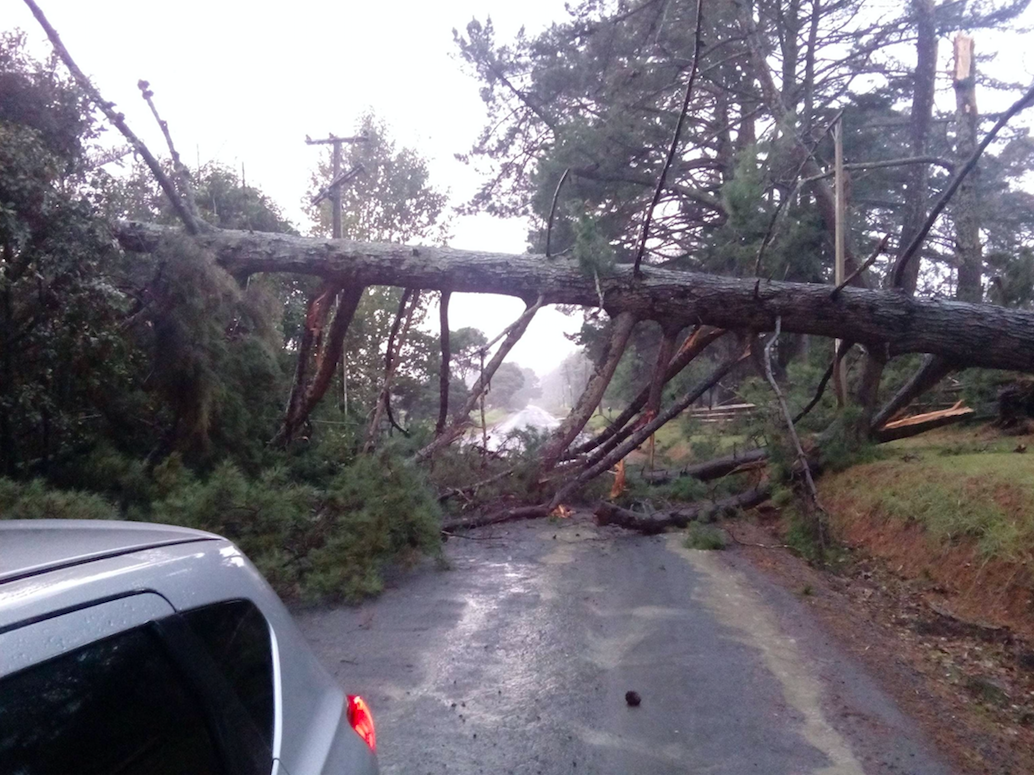 – The tree that suddenly came down right next to a Vector crew moments after they had repaired downed lines / Photo supplied by Vector.

“Overgrown trees not only cause outages, they also prevent our crews from repairing equipment quickly and delay the process of restoring power” – Vector website.

The fact is, Auckland has a warm climate – trees grow very fast here and as a result they are bigger and more likely to break. Within a decade a tree can go from a sapling to touching power-lines which means people with trees on their property near power-lines (residential, business or council/public land too) need to be keeping a close eye on things each and every year and always imagining what might happen with damaging winds from various directions.

Vector has some rules around managing trees:

It is a community responsibility and by working together, we can help prevent power outages and keep the community safe. Both private land owners and the council need to be doing their part to prevent power cuts caused by trees or branches falling on power-lines.

The Electricity (Hazards from Trees) Regulations 2003 (Tree Regulations) set out the obligations of tree owners and us. The Tree Regulations prescribe the minimum safe distances for trees growing near network power lines. When we see trees growing too close to power lines, we are required to take action by either trimming them or notifying the tree owner that they are required to trim their trees.

Some trees growing outside of the growth limit zone can also cause problems, particularly during a storm. Where we identify trees that could pose a hazard, we may contact the tree owner to work with them to remove the potential hazard. These are typically trees that are weak, fast growing or shed bark.

If you own property with trees near power-lines you can READ YOUR RESPONSIBILITIES HERE – because if everyone in the region follows these rules it will reduce power outages next time we have a storm. We all have to do our part, it’s not just up to the power companies who fix the lines after your tree comes down. You can even be fined up to $10,000 for not trimming your trees around lines. Some trees can be exempted from being trimmed too (ie, if it’s a big native tree). You can read more in this link and contact Vector if you have any questions on how to safely manage trees near lines on your property.

IMPORTANT SAFETY NOTICE:
***Please treat all downed power lines as live and stay well away from them. Report downed lines to Vector on 0508 832 867. And please donâ€™t attempt to cut or move trees that are in contact with power lines: call 09 301 0101 to report fallen trees – Auckland Council, Sunday afternoon via Twitter*** 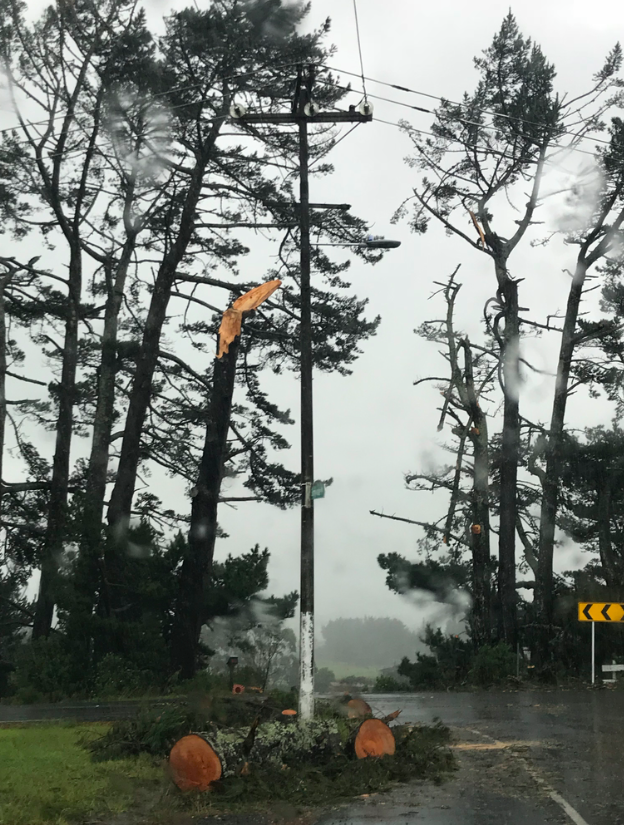 Big old trees next to big ol’ power lines in Massey, Waitakere – a classic example of why Auckland has lost power to so many homes and businesses this past week / Photo by WeatherWatch.co.nz taken this weekend.

WHY DO WE GET A TWO WEEK BUILD UP FOR A TROPICAL CYCLONE THAT MISSES US BUT ONLY A FEW HOURS WARNING OF A MAJOR STORM THAT CAUSES A MAJOR POWER OUTAGE?
This question has been asked a lot over the past few days from the general public and many businesses.  Put simply a tropical cyclone forms in warm waters and is a ‘better breeding ground’ for making predictable storms. “Predictable” in the sense we know they will form (often well in advance for the big ones) and that they will grow into a very serious life threatening event. With a tropical cyclone the damaging winds are right at the centre. The further away from the centre of the low you go the lighter the winds are. This is why when a deadly tropical cyclone brushes NZ just a few hundred kilometres out at sea we get no serious weather here and people often say “it was a fizzer” when in reality it just slipped past out at sea as a very serious storm still.

But what happened last Tuesday was as a result of the opposite type of storm – one that forms outside of the tropics and has a very different behaviour. Rather than tropical they are called EXTRA-TROPICAL and these are the ones that form generally in this brown belt: 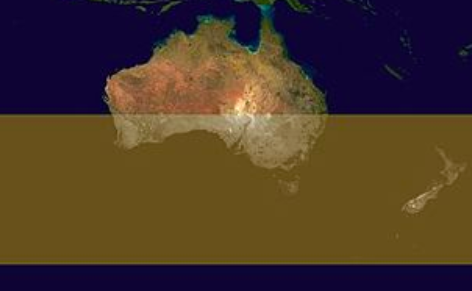 Oh and if you’re a bit confused about the term extra-tropical it’s because we typically do just call them “lows” or “depressions” or “storms” and tend to only use the term ‘extra-tropical’ in the news media when a TROPICAL cyclone has left the tropics and is coming our way, but the term actually relates to any cold core lows in that belt in the graphic above.

So as they come in there will be more warnings generally and it’s easier to lose place of who is most exposed to the worst weather. For example last week was all about the COLD blast coming in with strong to gale winds around the entire country and heavy rain and snow some places. Auckland was expecting to have gales and we specifcally warned Vector of power outages but only several hours out, not several days like with tropical storms. The low last week was very large, very messy and had a lot of moving parts.

WHY NOT NAME WINTER STORMS THEN?
In the US they do. Private forecasters decided something had to be done about these big winter (or non-summer) storms that sometimes caused more damage and power outages than hurricanes but were seen as less important due to their often shorter life span and less dramatic build up. Government forecasters in the US appear to disagree with the private sector doing this but it’s worked for some forecasters.

WeatherWatch.co.nz hasn’t gone down this track because instead we provide New Zealand’s only daily news service dedicated to giving you the weather story and where we can we do try to give advanced notice – but we still all collectively have more to do to understand the chaos that is weather.

In New Zealand we’re two small islands in the roaring 40s. Storms can surprise us with little notice. It’s why it’s so important we are all responsible for trees around power-lines because while forecasting still definitely has to improve further there are things we can actually do right now, today, to ensure we don’t get a repeat of the big power outage Auckland has gone through this past week.