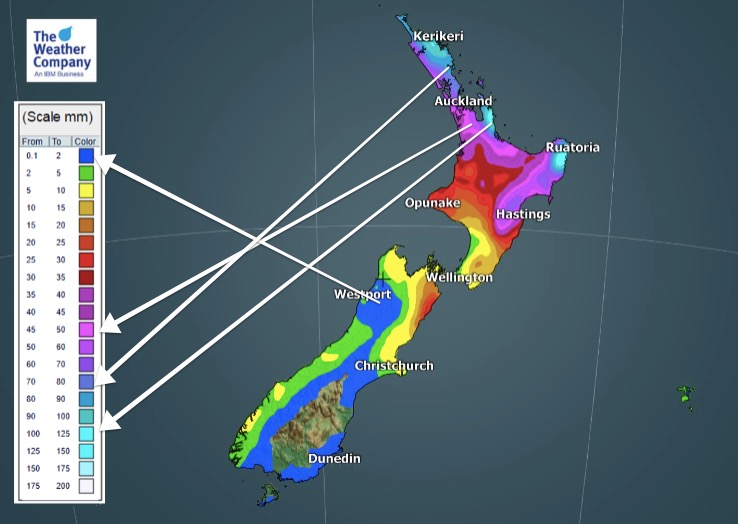 More rain is coming to help chip away at the water storage issues in NZ’s largest city with even bigger rainfall totals in surrounding regions.

Auckland water authorities were slow to react to a drought that started in 2019, only issuing water restrictions in May of this year. Mother Nature is now helping out but residents will need to continue to have shorter showers and avoid wasting/running water unnecessarily for some time yet.

WeatherWatch.co.nz says more rain this week will be helpful, but the totals don’t look huge for all of the Auckland region, due to the blocking nation of the Coromandel Ranges. “There will be a large low in the Tasman Sea and this will put rain and showers later this week in areas that still are in a significant 18 month rainfall deficit” says head forecaster Philip Duncan. “The Hunua Ranges may see 25mm later this week and weekend and if the rain stalls then those totals may possibly double, but it’s not locked in”.

The uncertainty comes from the ‘angle of attack’ – meaning the rain clouds have to first move over Coromandel Peninsula. The rain will be enough to help push this week back into “normal” territory as far as weekly average rainfall is concerned, but won’t likely have a giant impact on the storage facilities – meaning Aucklanders will need to continue conserving water for many weeks, maybe months, yet.

Heavier rain may likely be very close though – with the Coromandel Peninsula (which will be in the easterly flow, receiving the rain before Auckland does and limiting how much makes it across to Auckland) potentially receiving over 125mm within the next 7 days. “The Hunua Ranges are near some good rainfall totals this week, but the Coromandel Ranges may not be Auckland’s friend here, taking the bulk of the rain for itself to some degree”.

More data and graphs can be found at both www.RuralWeather.co.nz and our newly updates Maps and Radar pages at WeatherWatch: https://www.weatherwatch.co.nz/maps-radars

At least 50mm still good rain right? is there a chance of a tornado?

Definitely, it all helps.

Probably no tornadoes, at a push perhaps a low risk for eastern Northland.