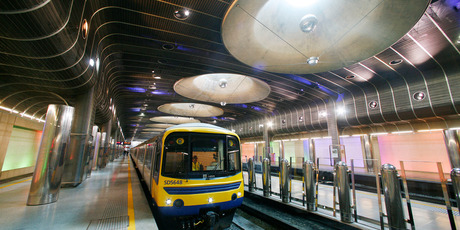 Limited Auckland train services are running after a major power outage this afternoon, but major delays are still expected for the next few hours.

Power was restored to all of the signals on the Auckland rail network after an outage shut down all train services across the region.

But passengers are still being advised to take buses, as it is expected to take some time to get trains running properly again.

Trains in between stations were forced to pull up into platforms, allowing passengers to disembark, after the outage.

Veolia Transport said it was trying to source as many rail bus services and taxis for customers on the network as it can.

The fault at KiwiRail’s National Train Control in Wellington, which controls Auckland signals and radio control, occurred about 4pm.

Limited services on the Eastern line started running just after 5pm, with all signals back up and running by 5.30pm.

But Britomart was packed with frustrated commuters at about 4:30pm.

A Britomart worker said rush hour traffic meant it would take “a long time” to replace trains with rail buses.

Image and story by NZHerald.co.nz

What a ridiculous setup!
Why are Auckland’s trains run from Wellington??????
Furthermore, isn’t Wellington on a fault line too??
What a joke!!
What the hell is wrong with this country??

Are we going to get any news on the thunderstorms due tommorow?