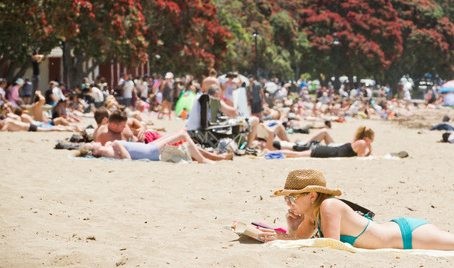 The official temperature was 28C at 12.30pm, but there were unofficial readings of 30C at Howick and Pakuranga in the east and Henderson in the west, he said.

“Officially it is less likely because the weather stations MetService have are at Whenuapai and Auckland Airport, which are much cooler than in downtown Auckland.”

A lack of wind in Auckland was contributing to the hot weather, but a few cloud build-ups could prevent higher temperatures later in the day, Mr Duncan said.

Mr Duncan said the South Island was not as warm with a fair bit of cloud and rain on the West Coast.

Christchurch was 24C at lunchtime.

ADDITIONAL
As of 2pm Auckland remained officially at 28 degrees while private stations are reporting temps from 27 to 33 across Auckland. The ‘feels like’ temperature – which WeatherWatch.co.nz uses when heat and humidity combine in summer – is currently 33 to 35 degrees over Auckland out of the breeze in the calm.   Auckland can continue to heat up until about 3:30pm but often after that temps no longer climb much – 30 degrees is still possible officially, but looking a little less likely than it did at noon in our view.