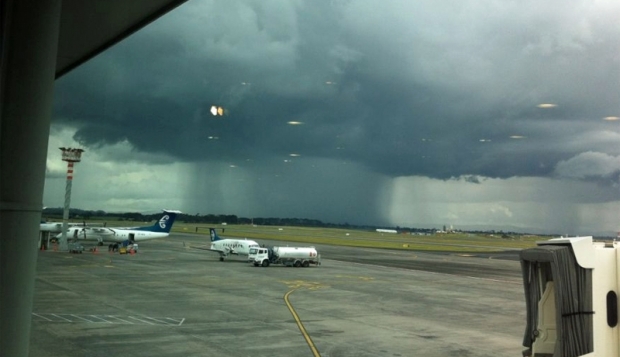 It was a bit of a brief and violent outburst for some in Auckland this morning as rain, hail, lightning and thunder swept parts of the city.

Not all of the city copped the show but a majority did and some of our Facebook readers were quick to comment when we put the word out.”Just had a thunder-induced near heart attack here, lol… gave me such a fright!! Amazing weather” said Erin.

Marlena mentioned “Crazy weather and right at school drop off time. Made me glad my wee one is still a baby. Back garden now resembles a marsh and the driveway a small waterfall”.

The rain tumbled down in some areas and Dane had the rainfall guage out “‎10 mm of rain in 10 mins. Was heavy but just light rain now”.

Others also mentioned the thunder and lightning display”Heavy heavy rain and amazingly loud thunder as we were walking into school in Massey Auckland!” according to Kirsty and Nicola added “Thunder, lightning & hail just as my boy about to go to the gate to catch the bus this morning at Te Kohanga”.

We believed that the area of showers approaching the city would break up as it often does but this time it gathered momentum and packed a bit of a punch. The thunder caught us on the hop!

The rest of the day doesn’t appear quite so eventful but thanks for all your comments into WeatherWatch.co.nz

I’m still waiting for the day Auckland gets a widespread thunderstorm like we used to get. Didnt hear a thing in Takapuna but that just shows how big Auckland is. Some people get it all, some get nothing!

Beautiful blue skies & sunshine with butterflies out feeding above New Lynn with a good wind from the West.