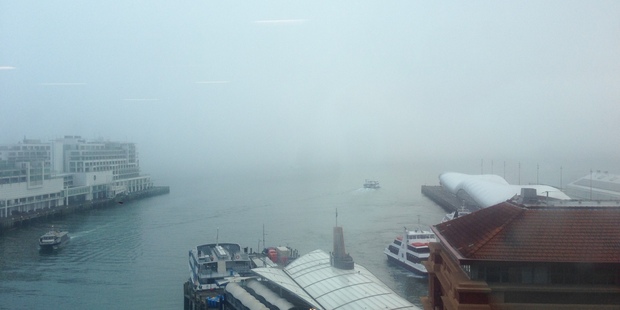 Motorists are being advised to drive with caution as thick fog covers parts of Auckland.

Auckland Airport spokesman Simon Lambourne said fog restrictions were put in place at 4.38am this morning.

Passengers were advised to check the airport’s website for the latest flight arrival and departure information.

The “radiation fog” had been caused by a humid air mass contrasting with cooler ground temperatures. WeatherWatch.co.nz says the fog will lift slowly this morning and more flights may be impacted.

A Police Northern Communications spokesman said a few minor crashes had occurred around the Auckland region this morning, however it wasn’t possible to say whether they were the result of fog or not.

“We had a crash reported up on the Northern Motorway between Oteha Valley and Bawden Rd hearing north – a nose-to-tail. There’s no report of injury at this stage. I can’t say whether we can blame the fog on it or not.”

The NZ Transport Agency warned Auckland motorists to take extra care at East Tamaki Rd and Springs Rd intersection as a collision had taken out the traffic lights at the intersection. No one was injured in the crash and the car was being towed from the scene, the police spokesman said.

Motorists were advised to drive with caution.

Thanks for the info – but rather confused with the timeframe – your post timed at 10.00 am but it is 9.43 as i am writing this. Just wonder if it’s old or new news!
Thanks – love your website – as usual!