Auckland: Drier than average weather looms for rest of May (+8 Maps) 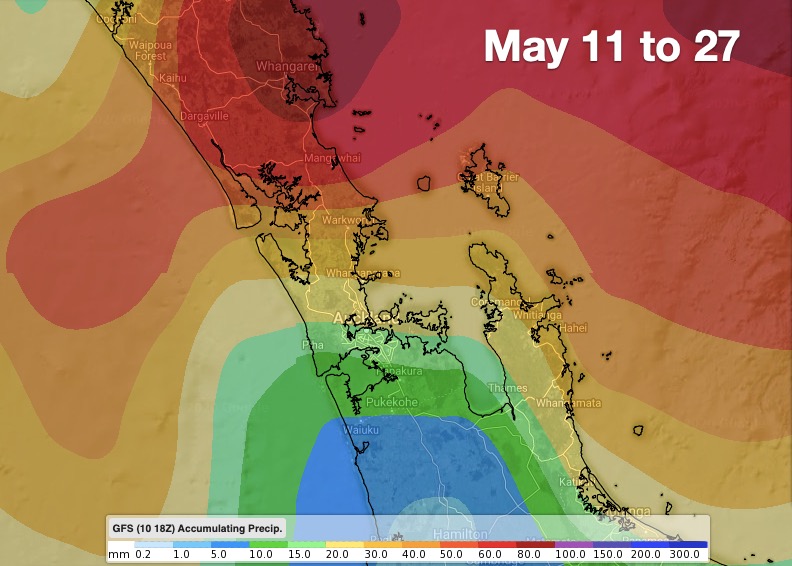 WeatherWatch.co.nz Exclusive — Aucklanders may be seeing showers lately but it’s too little, too late, to make a big dent into water storage dams.

While rain last week was heavy, especially around the Hunua Ranges, the downpours were hit and miss.

Auckland has been in a rainfall deficit for over a year now – and officially in drought this year.

WeatherWatch.co.nz first made mention of the 2020 dry way back in spring 2019 when we said that “Northern New Zealand was catching Australia’s big dry”. Despite messaging Auckland Council and Mayor Phil Goff a number of times they have so far not replied or acknowledged us. Both the Mayor and Auckland Council follow WeatherWatch on social media.

So, we shift our focus to you the Auckland public and will give you the advice we would’ve shared with the Mayor and Council had they been interested: The rest of May, despite some showers, is leaning drier than average. This despite a May forecast from Government Agency MetService of a “normal to wetter than normal”, “stormy’ and “cooler than average” month of May – so far a wildly incorrect tax funded outlook.

One positive is that extra long range, going into winter, we may see a jump in rainmakers from the west which could help. The next three months ahead suggests rainfall in Auckland may start to return to normal – but it’s definitely not locked in.

Another positive is that more easterlies and sub-tropical disturbances to our north will encourage more showers, with some parts of eastern Northland maybe getting another soaking over the next week or two.

But there’s a fine between northern rain and inland dry.

As you can see from the rain accumulation map below (May 11 to May 27), there may be some decent downpours in Northland – but the rain map gives that “rainbow” pattern over the Auckland area which shows the further south you go the lower the rainfall totals will likely be. Much of Auckland’s water catchment areas are to the south and west.

For May, be prepared for water levels to drop further as rainfall numbers go below average for this time of year in Auckland.

AIR PRESSURE MAPS – Marking where the highs (red) and lows (blue) will be over the rest of May. Note the big block of high pressure over Australia and spreading over NZ (South Island especially) over the next two weeks.

See these rainfall graphs and totals for yourself – by visiting www.RuralWeather.co.nz – the world’s largest weather data website for New Zealand!

whos predicting this weather the same people who predicted a low over the north island….. their predicting is starting to wear a bit thin

Hi WW, of course your forecasts are much better and more accurate than MetService and any other forecast. But, I think till now it’s above average for the first 10 days on May for Auckland right? Because the wet start we had last week.

That depends how far you start breaking it down, I don’t have day by day figures for that and in terms of recording rainfall I don’t think that would be of any use as there are too many variables in that regard. Best to take rainfall figures month by month. Auckland airport on average has 112.6mm for the month of May, so far we’ve had 60mm. So it could be a touch above average currently but if the rest of the month is fairly dry then May 2020 could well be a below average month.

Will have to see how the rest of the month plays out.