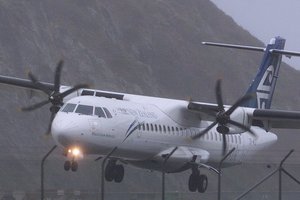 An Air New Zealand flight was struck by lightning two minutes before it was due to land in Auckland this morning.

Passenger Jen Donoghue said a “big massive ball of light” hit the left side behind the cockpit about 7.50am, accompanied by “a really loud, massive bang”.

“In my life I’ve been in only four flights and on my fourth I got struck by lightning,” she said.

“I was seated in the second row on the left. The sound as well as the visual, all at once, it was like an explosion, really. I personally thought the engine had blown but then I realised I was too far forward [from the engine.]”

“People were freaked out. The flight attendant was looking around like ‘What the hell was that?’ The woman attendant at the back said on the speakerphone that this does happen every now and again.

“They all did their very best to calm us all.”

Ms Donoghue said the pilot then told passengers that no damage had been done.

“He explained that when lightning hits the plane it travels from impact point down to the back and that on the tail there are tips, they’re designed to expel the electricity.”

Air New Zealand confirmed the flight was hit by lightning on its descent into Auckland.

A spokeswoman said the aircraft would be inspected by engineers before being cleared to return to service.

Aviation commentator Peter Clark said lightning strikes were not infrequent, and aircraft were designed to dissipate the impact.

“Aircrafts have a conductive surface on top of carbon frame so the lightning can dissipate,” he said.

“Normally it happens in descent because our planes fly above the weather mostly.”