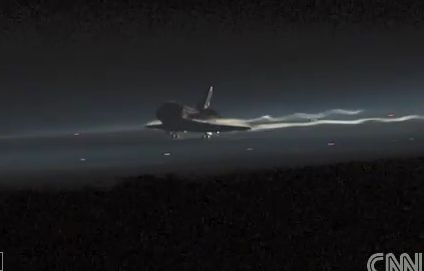 Soaring across the predawn haze, the space shuttle Atlantis glided back to Earth early Thursday — capping a 30-year program that saw hundreds of astronauts go into space.

The landing at 5:57 a.m. ET went off without a hitch at Florida’s Kennedy Space Center.

But it marked a sentimental finish for the four astronauts, who woke up to “God Bless America” on their final morning in space.

“This one was dedicated to all the men and women who have worked for the space shuttle program in the past three decades,” NASA said.

“I saw grown men and grown women crying today,” said Mike Leinbach, space shuttle launch director. “Tears of joy, to be sure … human emotions came out on the runway today. You couldn’t suppress them.”

Mission commander Chris Ferguson said he and the other three astronauts “were honored to be a part of this. But ultimately, it’s everyone who has worked on the shuttle program — although we got to take the ride, we sure hope that everybody who has ever worked or touched or looked at or envied or admired a space shuttle was able to take just a little part of the journey with us.”

Soon after it landed, Ferguson said the program ends on a hopeful note.

After Houston Mission Control signed off, ceding control to Kennedy Space Center, the mission control space filled with more than 100 people for an emotional outpouring. Flowers appeared, and a cake in the shape of Atlantis was rolled in. A box of cigars — which weren’t lit inside the building — was passed around by mission control workers.

“It’s been my extreme pleasure and honor to work with each one of you, and to have been part of this outstanding team of individuals so dedicated and passionate about the work they do,” Tony Ceccacci, entry flight director, told the mission control team. “… You are the main reason for the success of the shuttle program.”

He told the team, “Your work here has made America and the world a better place.”

The 13-day mission to the International Space Station was to stock the orbiting laboratory with supplies, food and equipment. The crew of four delivered more than 9,400 pounds of spare parts, equipment and other supplies, NASA said. Atlantis lifted off July 8.

In addition to Ferguson, the crew was also made up of pilot Doug Hurley, and mission specialists Sandra Magnus and Rex Walheim.

“We’re going to put Atlantis in a museum now, along with the three orbiters, for generations that will come after us to admire and appreciate,” Ferguson said. “And hopefully, I want that picture of a young 6-year-old boy looking up at a space shuttle in a museum and saying, ‘Daddy, I want to do something like that when I grow up,’ or ‘I want our country to do fantastic things like this for the continued future.’

“And if we set those steps right now, and they continue with that next generation of space explorers, then I consider our job there complete,” he said.

Atlantis’ landing means the United States has no way to lift humans into space for the first time in decades, leaving Russia as the only option to ferry American astronauts to orbit.

The first shuttle, Columbia, blasted off on STS-1 April 12, 1981. Since then, space shuttle crews have fixed satellites, performed scientific studies, and ferried materials and people to International Space Station Alpha, a football field-sized construction project in orbit. The shuttle program has sent 355 people from 16 countries to space, with five space shuttles on a total of 135 missions.

NASA can no longer afford to continue the shuttle program and simultaneously work on future projects, said Bob Cabana, director of the Kennedy Space Center.

Asked when astronauts might lift off from Kennedy Space Center again, Gerstenmaier said it could be mid-2015 or 2016.

Ceccacci — who joined NASA the year before STS-1, told CNN the program’s ending hasn’t quite hit him yet.

“I’m sure next week, you know — usually when one mission gets done, we’re getting ready to work on the next one. And (to) go back to the office and there’s not a next one to work on, that’s going to hit a little hard.” he said. “… It’s been emotional the whole week.”

Ceccacci said he is one of the lucky ones — he still has a job at NASA. He said officials need to come up with a long-range plan for America’s space program and hopefully lure back the employees who will now enter the private sector and “make some real money.” Of all the expertise in the shuttle program, he said, 80 to 90% is “going out the door.”