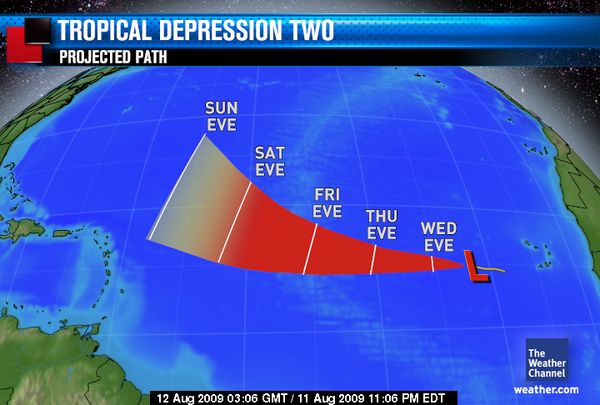 The second tropical depression of the Atlantic Hurricane season formed Wednesday morning NZT and indicates that favourable storm conditions may now be forming.

Tropical Depression 2, known as TD-2, has formed roughly well out in the Atlantic Ocean and is continuing to deepen.

International forecasters picked this ‘wave’ which came off Africa over the weekend as being favourable for storm development and some are predicting within 36 hours it may become the season’s first named storm.

If TD2 does reach Tropical Storm status it will be called Ana.   The Atlantic Season runs on names in Alphabetical order, starting at A.

The computer models pick that TD2 may impact Bermuda, others pick it will head out in to the Atlantic.  Either way weather enthusiasts around the world will be excited to finally see some action out in the Atlantic.  This year would be one of the quietest starts on record.

If TD2 doesnt form into a tropical storm there’s a very good chance the wave behind it will – with some forecasters predicting the eastern seaboard of the United States could be hit or affected in 12 days time – how’s that for advanced warning!

Due to our partnership with Weather.com we look forward to bringing you detailed coverage of the hurricanes that are most likely to impact the United States.

About time too.
Is the result of the late arrival of the development of the hurricane season in the Atlantic due to the economic recession or climate change ?
Maybe Swine flu’ had some thing to do with it???