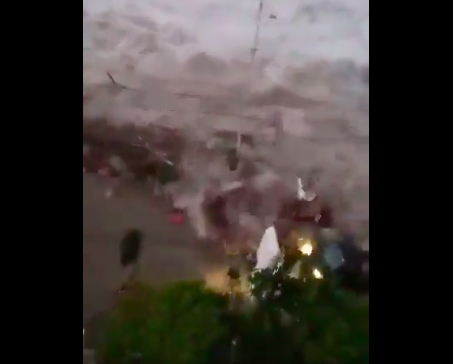 At least 48 people have died and more than 350 people are injured following a series of earthquakes and a tsunami that devastated the Indonesian island of Sulawesi, authorities say.

Thousands of buildings collapsed and evacuations were still underway Saturday in Palu City in the Donggala region of Sulawesi, Indonesia’s Disaster Management Agency (BNPB) said.
The first in a series of tremors was felt Friday at 3 p.m. (4 a.m. ET) 35 miles north of Palu, according to the United States Geological Survey. The largest shock — with a magnitude of 7.5 — was detected 50 miles north of Palu, according to USGS.
The shaking of the 7.5-magnitude tremor was “severe” and the likely damage following the quake was considered “moderate to heavy,” the USGS said.
A localised tsunami also hit beaches in the cities of Palu and Donggala as a result of the tremors, according to the BNPB.
An early tsunami warning had been issued by the Indonesian meteorological agency, but was later lifted after the agency ascertained that the water had receded.
BNPB spokesman Sutopo Purwo Nugroho shared a video on Twitter of the tsunami striking the coast at Palu. “Tsunami was about three meters high,” Nugroho wrote.
Read more and see video of the tsunami here via CNN.com