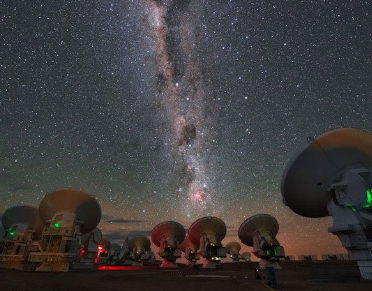 It has inspired astronomers, artists, musicians and poets but the Milky Way could become a distant memory for much of humanity, a new global atlas of light pollution suggests.

The study reveals that 60% of Europeans and almost 80% of North Americans cannot see the glowing band of our galaxy because of the effects of artificial lighting, while it is imperceptible to the entire populations of Singapore, Kuwait and Malta.

Overall, the Milky Way is no longer visible to more than one third of the world’s population.

Lead author Fabio Falchi from the Light Pollution Science and Technology Institute in Italy said the situation was a “cultural loss of unprecedented magnitude.”

Chris Elvidge of the US National Oceanic and Atmospheric Administration and a co-author of the study, added that the times he has seen the Milky Way have been magical experiences.

“Through our technology we’ve cut off that possibility for large numbers of people for multiple generations now,” he said. “We’ve lost something – but how do we place value on it?”

Described by John Milton as “a broad and ample road whose dust is gold, and pavement stars,” the Milky Way is so obscured by the effects of modern lighting that it is no longer visible to 77% of the UK population, with the galaxy masked from view across nearly 14% of the country, including regions stretching from London to Liverpool and Leeds.

Further afield, areas around the cities of Hong Kong, Beijing and a large stretch of the East Coast of America are among those where a glimpse of the galactic band is out of the question – a situation also found across much of Qatar, the Netherlands and Israel. In Belgium, it cannot be seen in 51% of the country.

“Humanity has enveloped our planet in a luminous fog that prevents most of Earth’s population from having the opportunity to observe our galaxy,” the authors write.

Published in the journal Science Advances by an international team of scientists, the research is based on data collected from space by the Suomi National Polar-orbiting Partnership satellite, together with computer models of sky luminescence and professional and citizen science measurements of sky brightness taken from the ground.

The resulting global atlas reveals that large swaths of humanity experience light pollution, including more than 99% of people living in the US and the European Union. People living near Paris would have to travel 900km to areas as such central Scotland, Corsica or central Spain to find a region with night skies almost unpolluted by light, the authors add.

80pct of Kiwis can’t see stars at night because of artificial light pollution https://t.co/jSwaSGatht via @NewshubNZ

By contrast, Central African Republic and Madagascar are among the countries least affected by light pollution, with nearly the entirety of Greenland boasting pristine skies.

“Until the advent of night-time lighting became really prominent in the 19th and 20th centuries, everybody would have been familiar with the Milky Way,” said Marek Kukula, public astronomer at the Royal Observatory in Greenwich, who was not involved in the study. “We see it in mythology about the sky, in all cultures around the world. It is one of the obvious components of the sky along with the stars, the planets and the moon.”

When light from our streetlamps, homes and illuminations is thrown up into the sky it bounces off particles and moisture droplets in the atmosphere and is scattered, resulting in artificial “sky glow” – one of the key factors contributing to light pollution. The upshot is that spectacles like the Milky Way can become obscured from view.

The Milky Way has been virtually swallowed up by light pollution https://t.co/kPFOOVVgdX pic.twitter.com/0O5qKBzt7R

“The night sky is part of our natural heritage. It is beautiful, it is awe-inspiring and being able to see it is a way for us to connect to the wider universe and understand our place in the natural world,” said Kukula. “If we lose that it is a shame because we have lost that direct connection with something much bigger than us and something that is very beautiful.”

The situation could become worse. According to the new study, if all sodium lights are replaced with cool white LED lighting, artificial sky brightness seen across Europe could more than double as a result of the increase in blue-light emission.

And it isn’t only our view of the night sky that is affected by light pollution. “There are also biological consequences, not only on birds and insects and mammals, but also even on humans,” said Elvidge, pointing out that the light pollution can disrupt the natural behaviour of animals and has raised a number of human health concerns.

It isn’t all doom and gloom. Despite the Milky Way being masked from view in many cities across the UK there are still regions of the country where it is possible to get a good view of the night sky. “There are various dark sky parks and reserves in the UK which have been internationally certified by the International Dark Sky Association to have low levels of light pollution – places like Galloway Forest Park,” said Kukula, adding that various online tools can help to direct stargazers to the right part of the sky.

But the authors of the new study say more needs to be done to tackle the issue of light pollution. Among possible measures, says Elvidge, are the use of more shielded street lighting, motion-activated lights and cut-off times for illuminating buildings.

Kukula agrees, “It will reduce our electricity bills, it will reduce our carbon footprint, it won’t affect the lighting that we have on the streets,” he said. “And it will allow us to see more of the wonders of the night sky.”

I remeber when I lived at Lake Tekapo 30yrs ago, when waqlking to work in the early dark hours I had no problem looking up to see the Milky Way in great detail with the naked eye, along with the ocassinal Southern Lights.

Best of all I recall being able to see Hayleys Comet in 1986 without problems just sitting in the dark sky, it’s tail could easily be seen.