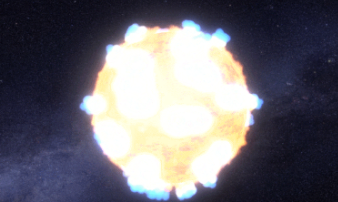 It lasted only 20 minutes and took place 1.2 billion light years away, but NASA managed to catch it on camera: a star exploding.

The brilliant flash of an exploding star’s shockwave — or “shock breakout” — has been captured for the first time in visible light by the Kepler space telescope.

An international team of researchers analyzed some 50 trillion stars photographed by Kepler over a three-year period, searching for supernovae.

Death of a supergiant

A supernova occurs at the end of a massive star’s life, as a colossal, catastrophic explosion erupts, causing the star to burn brighter than some galaxies for around two weeks before fading to black.

The team analyzing the Kepler data found exactly what they were looking for: a red supergiant 500 times the size of our sun and around 1.2 billion light years away exploded while in the telescope’s view.

Lead researcher Peter Garnavich, an astrophysics professor at the University of Notre Dame, said in a statement that the star is so colossal that “Earth’s orbit around the sun would fit comfortably within (it).”