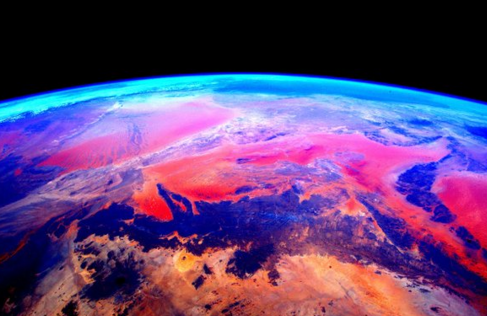 In one of his final interviews from the International Space Station, astronaut Scott Kelly said that the Earth’s atmosphere “looks very, very fragile” and “like something that we need to take care of.”

Kelly will return to Earth in March, but spoke with CNN’s Chief Medical Correspondent Dr. Sanjay Gupta via satellite. During his time at the space station, Kelly has remained active on social media and often shares his unique perspective of the planet by posting photos. Because of his spectacularly encompassing vantage point, Gupta asked Kelly how he would define the Earth’s condition if it were a human body.

“There are definitely parts of Asia, Central America that when you look at them from space, you’re always looking through a haze of pollution,” Kelly said. “As far as the atmosphere is concerned, and being able to see the surface, you know, I would say definitely those areas that I mentioned look kind of sick.”

He said he notices weather systems, such as tropical cyclones, in unexpected locations.

“When you look at the … atmosphere on the limb of the Earth, I wouldn’t say it looks unhealthy, but it definitely looks very, very fragile and just kind of like this thin film, so it looks like something that we definitely need to take care of.”

Kelly is currently in his 501st day in space over six different missions and the 321st day of his one-year mission aboard the International Space Station. He has now been in space longer than any other U.S. astronaut.

Part of his current mission includes conducting a twin health study comparing the mental and physical toll on Kelly’s body in space with his twin brother, retired astronaut Mark Kelly, who is on Earth. The medical tests are measuring the impact of zero gravity on bone density, vision, the microbiome, blood, heart and cells, as well as the psychological impact on mood, stress and cognitive functions.

Kelly said he is doing well, although he feels like he’s been up in space for a really long time and looks forward to getting home soon.

“I don’t really have any surprises,” Kelly said. “A lot of the research we do is imagery based. Just this morning, I was doing some ultrasound exams on my eyes, on my heart and a lot of that data is stuff that will be analyzed by scientists and researchers and it will take time well after I’m back before we have results. But from a kind of a subjective perspective, I kind of knew what to expect going into this because I’ve flown a long-duration flight before, so you know there’s been little effects on my vision which I had last time. But overall, nothing alarming.”

Kelly will splash down March 1, along with Russian cosmonaut Mikhail Kornienko, who has spent the year with him on the ISS after launching on March 27, 2015.

As George Carlin said – “The Earth is fine and has been for billions of years and before we came along. She has been through much worse than Humans and has come through. The planet is fine, it’s the people on it who are f%*@^d”

and never has been; but we didn’t figure this out until recently. Happens we have just the tools we need to bypass Armageddon and guess how we got them? Turns out we’re the planet’s only hope and warfare has been the path to that possibility. We’ll figure out the other stuff, cleaning up and all; but this ain’t permanent, this planet. Eventually we’ll have to get out of here and once again we’ll have to blow a kiss backwards to our hellish habits of killing each other in droves as we rocket on to our new planet. Kind of hand over fist, the process.