Astronomy: “Earth-like” planet only 14 lightyears away 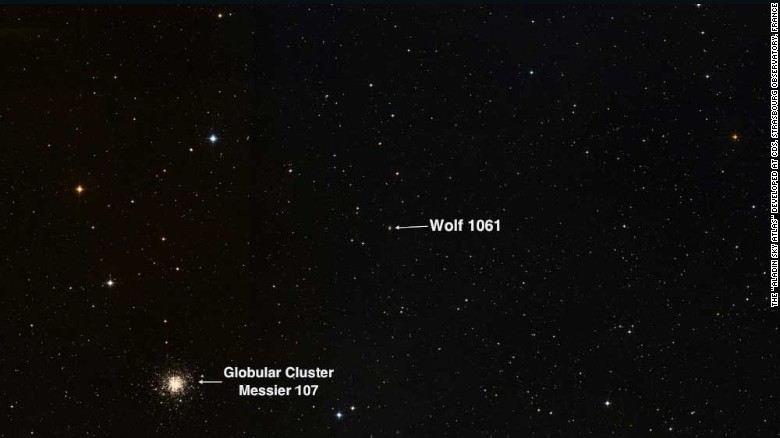 Alien life could be closer to us than previously thought. Scientists have just discovered the nearest habitable planet to Earth.

The new world is one of three surrounding a red dwarf star called Wolf 1061, which is just 14 light years away. It was detected by scientists at the University of New South Wales (UNSW) in Australia.

All three planets have the potential to be solid and rocky, but only Wolf 1061c exists within the “Goldilocks zone” — a distance from the star (much smaller and cooler than our sun) that is not too hot and not too cold for liquid water.

“Other planets found that are habitable are not nearly this close to Earth. Because of the close proximity of this planet to us, there is good opportunity to find out more about it.”

“The close proximity of the planets around Wolf 1061 means there is a good chance these planets may pass across the face of the star,” UNSW team member Rob Wittenmyer said in an earlier statement.

“If they do, then it may be possible to study the atmospheres of these planets in future to see whether they would be conducive to life.”

NASA has confirmed more than 1,870 exoplanets — worlds outside our solar system. But this discovery is particularly important because Wolf 1061c is both habitable and close to our solar system.

Planets that exist within a Goldilocks zone have the potential to host intelligent life.

But Wright does not think that human life could exist on Wolf 1061c.

However, Wright added that there may be a “twilight zone” that partially faces the star, where life is possible and humans could “plausibly,” but not comfortably, survive.

The planet has been described as a “Super-Earth” because its mass is more than four times the mass of the Earth and it could have a rocky surface.

But this discovery is only the beginning of nearby habitable worlds.

Many other potentially habitable planets exist in our galaxy that we have not located yet.

“There are around 50 billion dwarf stars in our galaxy and about half of these — some 25 billion — could have several small, rocky worlds orbiting them,” Wright added.

“Over the next 20 years we’re going to learn a lot more about whether we’re living in a galaxy with other intelligent species.”

In the coming years they expect to find many more planets that could host life.