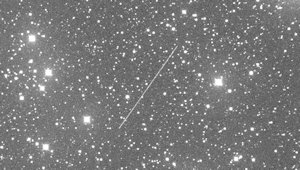 Astronomers estimate that 2012 XE54 is about 36 metres wide — big enough to cause substantial damage if it slams into Earth someday. An object of similar size flattened 2,000 square km of forest when it exploded above Siberia’s Podkamennaya Tunguska River in 1908.

The first known case, Tricarico added, was “asteroid 2008 TC3 which was totally eclipsed just one hour before entering Earth’s atmosphere over Sudan in 2008, and asteroid 2012 KT42 experiencing both an eclipse and a transit during the same Earth flyby in 2012.”

2012 XE54 will be coming back to Earth’s neighborhood before too much longer. The asteroid completes one lap around the sun every 2.72 years.

Scientists have discovered about 9,000 near-Earth asteroids to date, but perhaps a million or more such space rocks are thought to exist.

And some of them are potentially dangerous. Observations by NASA’s WISE space telescope suggest that about 4,700 asteroids at least 100 m wide come uncomfortably close to our planet at some point in their orbits.

So far, researchers have spotted less than 30 percent of these large space rocks, which could obliterate an area the size of a state if they slammed into Earth.

But there are much bigger asteroids out there, such as 4179 Toutatis, a 5 km wide behemoth that’s in the process of flying by Earth now. Toutatis will remain 7 million km away during its closest approach Wednesday morning, but it may come closer on future passes.

Toutatis would inflict devastating damage if it slammed into Earth, perhaps extinguishing human civilization. The asteroid thought to have killed off the dinosaurs 65 million years ago was about 10 km wide, researchers say.