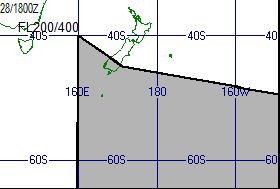 Just two days after we gave the all clear for trans-Tasman flights to resume the ash cloud has reappeared and is currently clipping the lower South Island.

The incoming cloud has a base of 20,000 feet which is the same as last week.

Air New Zealand continues to operate as normal but the ash has again affected JetStar and Qantas who are refusing to fly under any ash despite authorities saying it’s perfectly safe to do so.

Qantas has rescheduled one flight from Sydney to Queenstown to leave half an hour earlier, and delayed another two flights between the centres for a day.

Jetstar has cancelled all its Queenstown services for today.

The airline has also canned another three flights between Christchurch and Auckland.

No ash is expected anywhere near Australia over the next 24 hours and WeatherWatch.co.nz says most of the Tasman Sea is clear too.

Yesterday an aviation analyst accused Qantas and JetStar of grounding flights to save money.

As we reported on Monday conditions for the Tasman Sea and Australia areas looked clear for the “next day or two” but warned that while early indications from both WeatherWatch.co.nz and Civil Aviation showed a mostly clear week ahead, people should check daily to have the most up to date information.

Predictions made by New Zealand and Australian authorities only go out for 18 hours.  Any predictions beyond 24 hours are mostly based on the Australian 18 hour prediction map then making an assessment on where that cloud will go to in a further 24 hours or so as it heads east towards New Zealand.

But WeatherWatch.co.nz says while conditions for flying remain safe it is up to the individual airlines to choose whether or not to fly.

WeatherWatch.co.nz and the Civil Aviation Authority stress that the ash cloud can only accurately be tracked up to a day or two in advance.  Judging by current models Australia’s skies should remain ash free on Thursday and Friday but that same prediction can’t be made for New Zealand on Thursday and Friday with the recent new cloud snapping at our heels.

The ash is travelling in a jet stream which snakes wildly across high altitudes above the earth and can be incredibly tricky to map beyond a day or two.  It is far less predictable than the day to day clouds that move at a much slow pace underneath the jet stream.

– Homepage image / 6am Wednesday ash cloud prediction by MetService.  WeatherWatch.co.nz has shaded it grey to highlight the ash cloud.

I found this on how to read an ash advisory – good for the layperson like myself:
http://volcanism.wordpress.com/2009/12/04/how-to-read-a-volcanic-ash-advisory/