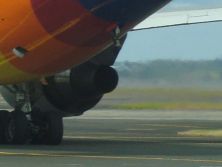 The ash cloud that has disrupted tens of thousands of air travellers this month is finally taking a break from our skies for at least the next couple of days reports WeatherWatch.co.nz.

Latest ash advisories from New Zealand and Australian authorities show the ash cloud giving a reasonably wide berth to the two nations for the next day or two.

WeatherWatch.co.nz says beyond that it’s difficult to predict with too much detail due to the chaotic nature of the jet streams but points out that further ash clouds continue to race above the Southern Ocean.

The next ash cloud coming in is incredibly low, between 5000 and 20,000 feet which would affect all airlines should it move over flight paths but the good news, at this stage, is that it’s expected to remain well south of both countries over the Southern Ocean.

In fact early indications point towards this ash cloud remaining well south of New Zealand and Australia for the rest of the week says WeatherWatch.co.nz, based on the latest 24 hour models, which show that even beyond 24 hours it would take some effort for them to reach us.

Civil Aviation Authority Meteorologist Peter Lechner agrees and told WeatherWatch.co.nz this afternoon that while we can only accurately look ahead for the next day or two the likely forecast for the rest of the week should see the ash staying well south of New Zealand, but advises people to check back for regular updates.

– Homepage imag — All flights are operating again to and from NZ / WeatherWatch.co.nz