Home > News > Argentina: Would you swim in this river?...

Argentina: Would you swim in this river? 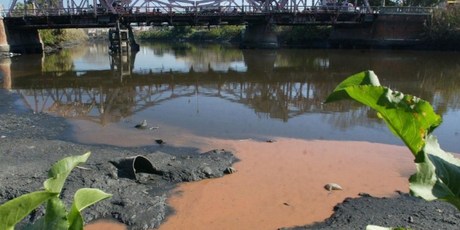 Riachuelo, a densely populated river basin on the edge of Buenos Aires, is among the world’s most polluted sites and has been targeted for clean-up after two centuries of stench.

The river was listed this week as one of the ten most polluted places in the world in a report by the Blacksmith Institute environmental institute and Green Cross Switzerland.

The basin – which covers a dizzying jumble of open-air garbage dumps just beside crowded shantytowns, raw sewage and factories – is home to an estimated five million people.

The roughly 64-kilometre Riachuelo meanders along the southern edge of Buenos Aires province, long polluted by tanneries and other factories, full of germs and heavy metals.

It emits an eye-searing stench powerful enough to nauseate all but local residents, who may be inured to the stink but who suffer from a litany of breathing, lung and skin woes.

While it might seem hard to believe, the polluted waterway has been an issue not for a few years or even decades – but for more than two centuries.

The first clean-up plan was launched in 1810, before Argentina became independent from Spain, but the strategy failed as chaos end political instability riled the young nation.

It would be bad enough if few people were exposed to the toxic environment.

But five million people are being harmed here – more than the entire population of Uruguay next door and one in eight Argentines.

Over the years, literally hundreds of plans have been approved to answer to an obvious public health threat.

It is not a coincidence that poor people with few resources have been made to wait for years and decades – even as they grew sick or died waiting for change.

Change in the air (and water)?

Then in 2006 something significant happened, in theory: the Supreme Court ordered Argentina’s authorities to clean up Riachuelo once and for all.

It isn’t an easy goal.

Water in the 2,300-square-kilometre basin is at least 50 per cent above permitted levels of mercury, arsenic, zinc and lead, according to environmental pressure group Greenpeace.

The toxic cocktail that five million people live in, drink and breathe, includes not just unregulated housing and raw sewage but some 20,000 industries, according to the government.

Locals say it may be the death of them, if a latest move toward clean-up doesn’t succeed.

“Going down to the riverbed in Riachuelo is like sinking into thick black yogurt,” said Guillermo Balbi, a professional diver who has worked in the area.

There are also oil refineries and chemical storage plants soiling the river basin; one makeshift settlement is grimly named Flammable Slum – “Villa Inflamable”. For hundreds, this is home.

Now, it will be up to a new government panel, which has emerged on the heels of the high court order, to see if real strides can finally be made in the name of so many people living in this environment.

Called the Riachuelo-Matanza Basin Authority (ACUMAR), it groups the federal, provincial and federal capital city governments in a coordinating body that is starting to get some things done.

So far, residual waste has begun to be moved. Some of the squatter slums lacking water and sewer service have been taken down or relocated. Fifty-nine sunken ships have been removed.

Industries have been ordered to reduce industrial waste; some 95 per cent of Riachuelo’s pollution is from tanneries and chemical waste.

The scale of the challenge is simply massive.

Many are alarmed that sediments from Riachuelo may be dumped in the Rio de la Plata. And open-air garbage dumps in Riachuelo actually increased from 141 in 2008 to 348 in December 2010.

Alsogaray – who was photographed campaigning in a fur coat – pledged that people would be able to swim in the river in three years’ time.

Instead she presided over a massive misappropriation of funds and was sentenced to jail for corruption, skimming public finds and illicit acquisition of wealth.