Arctic: Record breaking temperatures ‘have robbed the Arctic of winter’ 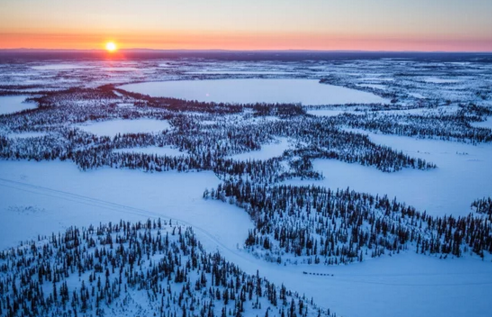 This year’s record-breaking temperatures have robbed the Arctic of its winter, sending snowmobilers plunging through thin ice into freezing rivers and forcing deliveries of snow to the starting line of Alaska’s legendary Iditarod dogsledding race.

Last month’s high temperatures â€“ up to 16C (29F) above normal in some parts of the Arctic â€“ flummoxed scientists, and are redefining life in the Arctic, especially for the indigenous people who live close to the land. 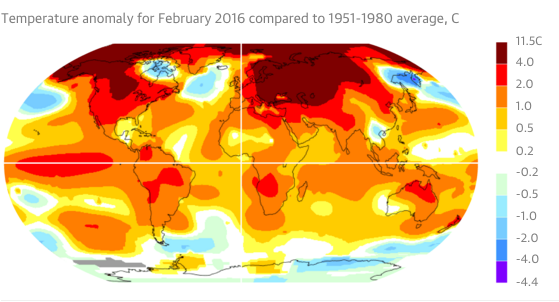 In Fort Yukon, an indigenous Gwich’in community eight miles inside the Arctic Circle, the freakishly warm weather is forcing people off the rivers that are their main transport corridors in the winter time.

“You can’t trust the ice,” said Ed Alexander, Yukon Flats centre coordinator for the University of Alaska at Fairbanks. “This is the warmest winter that we have ever seen up here. We have had less snow. We have had real thin ice. We have had an explosion of growth in the brush clogging up trails and that kind of thing. It makes everything dangerous.”

Other communities downriver lost a number of people this winter when their snowmobiles fell through soft ice â€“ and these were experienced hunters and trappers, he said.

Alexander said he and his wife had a narrow escape when they went out for a Sunday drive on their snowmobile. “I noticed there was water all the way across the river and I went to stop my snow machine and say: ‘Oh maybe we should turn around and go back a different way’.”

By the time he turned around to his wife, Alexander saw the back of the snowmobile was already sinking into snow and soft ice. “We just took off and there was as rooster tail of water coming out 30ft behind us,” he said. “We made it back to shore but that will wake you up.”

Warm is a relative term in Fort Yukon. The community nestled between the Yukon and Porcupine rivers lays claim to the coldest â€“ and hottest â€“ temperatures ever recorded in Alaska.

Persistent above-freezing temperatures have melted much of the local snow in Anchorage, leading snow to be sent in by train for the start of the famous Iditarod dog sled race.
Temperatures at the start of this week were well within the boundaries of what most of the world would describe as very cold at â€“6C (20F), but that was still up to 10C (18F) warmer than expected for this time of year.

“When I was growing up it would warm up from 60 below to 20 below and we would be walking around with T-shirts on,” said Craig Fleener, a Fort Yukon native who advises the governor on climate change. “It’s all a matter of perspective.”

This year, the backwaters were already slushy by early March â€“ so much so that Fort Yukon had to start their dog sled races in the middle of town rather than on the ice. The smell of sap was already coming off the willows, and some plants were budding up, Alexander said.

Winter was almost over â€“ without ever getting cold enough to create the conditions Arctic villagers rely on for their way of life.

In Fort Yukon, many people depend on wood for heating in the winter months.

Come freeze-up, they are out with heavy equipment on the river hauling timber. But without a consistent run of extremely cold days â€“ about two weeks of temperatures approaching -51C (-60F) â€“ the snow never gets hard enough to pack into ramps or roads.

The ice over the river never gets thick enough for heavy equipment, said Dacho Alexander, a local magistrate and Ed’s brother.

“I normally like to have an ice thickness of between 24 and 36 inches and generally up here we have about 34 to 36 inches,” Dacho Alexander said. The ice this year never made it beyond 20 inches, at the points where he drew core samples.

“We really need 50-60 below in order for the ice to thicken up. Even if it is a week or two weeks that gives us really good ice thickness. It’s not the same to have two months of 10 below. The ice doesn’t get any thicker.”

January and February obliterated global temperature records â€“ and nowhere more so than in the Arctic which saw some locations 16C (29F) warmer than normal.