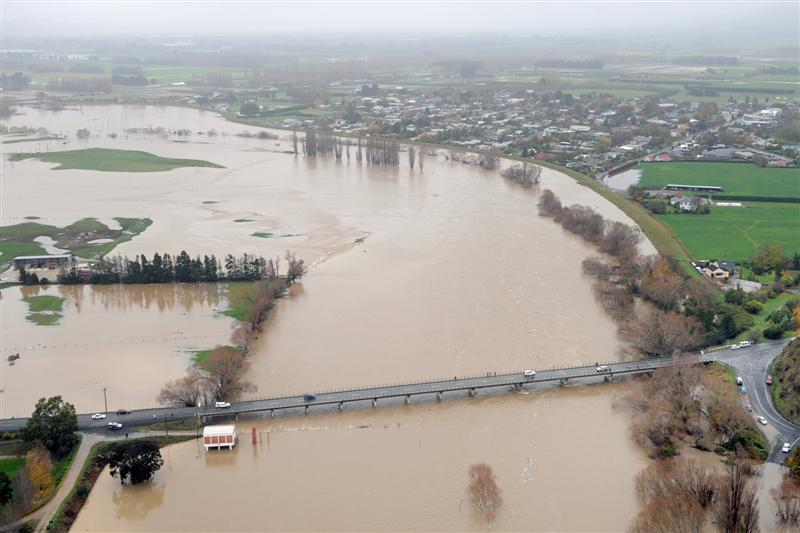 The flooding over the Taieri Plains in 1980 was a once in a 100 year event. Resident Stu Oldham wrote this article about those very soggy days thirty years ago.

After a wet end to May, the heaviest rainfall in 57 years was falling on already sodden ground. It helped push the river close to the top of the bridge before washing three 14-metre spans and two piers – about 40m of bridge – downstream.

Low cloud made it difficult for civil defence personnel to see how bad the flooding might get, but it was soon obvious that the Taieri Plain was slowly but surely becoming a muddy lake punctuated by islands of raised land and the roofs of partially submerged houses.

Mosgiel was awash – nearly every homeowner awoke to find their property under water – and Dunedin, assailed by surface flooding and slips in the city and around the peninsula, was cut off by flooding on State Highway 1 and the main trunk railway line.

A state of civil emergency was declared for the West Taieri Plain, between Mosgiel and badly-flooded Henley.

Helicopters, jetboats, tractors, and even dinghies and canoes helped evacuate more than 1400 people from their homes before nightfall. Soon, more than 120 houses would be flooded or isolated.

Farmers, animal welfare officers and countless volunteers moved stock from flooded and flood-threatened paddocks to higher ground. Stock was corralled and fed in safe areas on the by-then closed State Highway 1, and transported to farms as far afield as Southland and Canterbury.

About 7500 cattle and 6200 sheep were eventually evacuated. It would be many months before many of those animals – and their billeted farmers – came home.

When a stopbank on the Waipori River burst on June 7, more than 8000ha of land between Waihola and Allanton, including Dunedin’s airport at Momona, was deep under silt and water.

Many areas would stay that way for eight weeks before draining to become heartbreaking, stinking bogs.

The disaster would cost about $8 million – more than $30m if it happened today. Civil defence officials reckoned the plain had never endured such a serious and widespread flood.