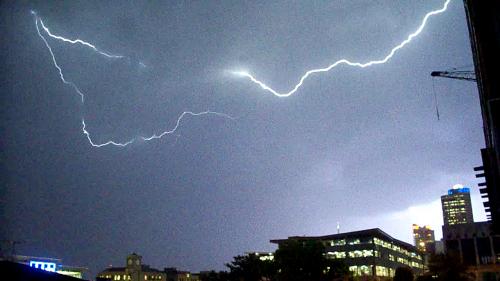 Noticed a lack of thunderstorms over the past couple of years across New Zealand?  Well, we’re not the only ones.  According to the World Meteorological Association the last 12 months had fewer thunderstorms due to the worldwide recession.

Speaking from Geneva, Chief Meteorologist Alberto Piccard said thunder activity around the planet had overall been quieter across 2010.   “We’ve had some big tropical and extratropical events over the past 12 months which have seen resources shifted at most government forecasters around the world.  This has meant a clear reduction in the number of government funded thunder activity across the planet”.

Dr Piccard said in particular New Zealand and the United States had seen a reduction in thunderstorms.

With news that New Zealand did not have a double dip recession last year forecasters here are hoping to reintroduce thunderstorms back into the forecasts again.

Dr Piccard says while thunder activity has increased slightly over the last few months we need to be cautious.  “Yes there are signs the world’s economy is strengthening but it’s far too early to say we have money again – so it may be a few months, if not a couple of years, before we see widespread global thunderstorms”.

“Until then we’ll have to put up with cheaper weather alternatives such as low cloud and fog”.

I don’t think it is an actual April Fools Joke thing as thunderstorm activity has really diminished especially here in Canterbury as we haven’t had a jiucy thunderstorm for ages. The only ‘thunderstorms’ here, have been of the underground variety unfortunately which have become quite tedious over the last 7 months. La Nina period do provide a lack of thunderstorm activity here so this Dr. Piccard guy is quite right for NZ but I can’t understand what the world’s economy has to do with it? Paying for thunderstorms???

Perhaps we should look at moving to a user pays system for the more dramatic weather with a sliding scale from thunderstorm through to Cat 5 Tropical Cyclone.

LOL, Enjoyable read. I hope this is what it appears- an April fools joke.

Pull the other one.

Will look forward to futher updates on this story on 1 April next year!
I will make do with a cheaper weather alternative here in Wellington for now which is the wind!
Maybe we could have pre-pay thunderstorms?