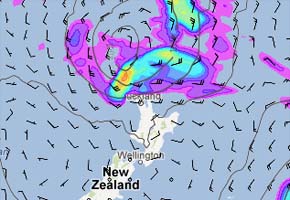 Since yesterday’s article regarding what to expect for the week ahead a low pressure system forming north of New Zealand today will move closer to the top of the North Island tomorrow and is looking like making more of an impact then initially expected. High cloud will spread over the upper North Island tomorrow, a few showers develop about the tip of Northland in the morning then rain moves in during the afternoon over the rest of the region with strong east to southeasterly winds increasing during the day. Rain may be heavy for a time in Northland especially in the east then easing in the evening.

On Thursday the low moves a little further south and it’s accompanying east to southeasterly airflow which will be strong at times spreads over the whole island by the end of the day, areas of rain north of the Waikato in the morning spread south during the day mainly in the east stopping short of Wairarapa. Large parts of the Central North Island and Waikato will remain mostly dry during this period however there will be a few showers about. East Cape may receive some heavy rain at times from morning then easing at night. Parts of Taranaki especially in the south through to Wellington along the coast will remain dry but there will be high cloud.

On Friday the easterly airflow eases in the morning as the low moves away to the east, rain also clears and conditions will become brighter in the afternoon. Finally a brief settled spell will develop on Saturday as a ridge spreads over the Island however a north to northeasterly airflow develops by the end of the day with increasing cloud.

During this time the South Island is likely to remain relatively unscathed apart from some cloud and the odd shower in the far south tomorrow. Northeasterly breezes are likely to be fairly persistent in the east on Thursday and Friday coming around an anticyclone east of the South Island, those type of northeasterly winds are never too exciting and can be a little chilly as many in Christchurch know. The weekend brings a warmer north to northwesterly airflow however.