Anticyclonic weather to start the week, a sub tropical low looms however 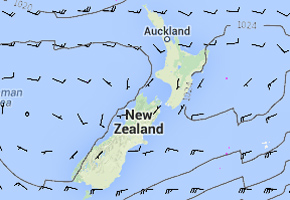 The start to the week is looking fairly good. Tomorrow an anticyclone covers all of New Zealand bringing mostly sunny weather, watch for pockets of morning cloud for some and then afternoon sea breezes. Meanwhile a sub tropical low forms in the north Tasman Sea.

The South Island and lower North Island continues the run of good weather on Tuesday, sea breezes for most once again in the afternoon. For the upper North Island areas of cloud increase during the morning as a low to the north of the country moves southwards, the odd shower moves in from morning about Northland and afternoon about Auckland. Any showers will be brief with mainly dry weather prevailing. Showers look more likely overnight from western Bay Of Plenty northwards.

Wednesday sees mostly sunny weather about the South Island again, light winds and afternoon sea breezes. Later in the day some cloud approaches Nelson and Marlborough, there may be a light shower or two there overnight. Cloudy skies about much of the North Island although southwestern parts of the Island may just have high cloud till evening when cloud thickens.
The odd shower turns to rain after midday for Northland through to Bay Of Plenty, Gisborne sees some rain from afternoon and Taranaki may see a shower or two from afternoon also. The airflow over the North Island is east to northeast so it may be fairly humid.

Thursday sees a humid northeasterly airflow over the North Island, expect cloudy spells but sunny breaks are possible at times too. For southwestern parts of the island and also the Central North Island northwards expect isolated showers, some may be heavy and this will also be the day a thunderstorm or two could crop up.

About the South Island expect sunny weather and sea breezes for Southland and Otago, also on the West Coast south of Greymouth. Most other places see sunny weather also with north to northeasterly breezes, the only difference being a few isolated showers could crop up in the afternoon, mainly about inland areas.

Humid northeasterlies continue over the North Island on Friday bringing showers for some but in saying that there will be dry pockets about, showers may be heavy wherever they fall. About the South Island a northerly airflow develops ahead of a low pressure system in the Tasman Sea, sunny weather in the east with some cloud gradually developing in the west.