Another winter storm targets central US 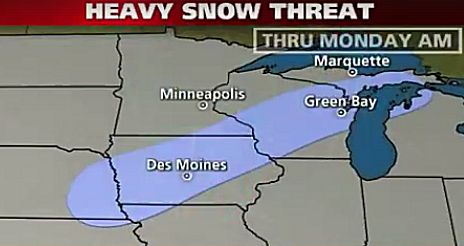 Another late season snowstorm is expected to bring blizzard conditions with 15-20 cm of snow and winds gusting to near 60 km/h to parts of the midwestern US.  Parts of Nebraska, Iowa, Minnesota and Wisconsin could all be affected by this storm.  The storm is expected to get going Sunday afternoon and last into Monday afternoon, local time (Monday morning to Tuesday morning NZDT).

Big cities that are likely to be affected by this storm include Omaha in Nebraska, Des Moines in Iowa and the Wisconsin cities of La Crosse, Madison and Green Bay.

Heavy snow and gusting winds are expected.  There is also the possibility of pockets of thundersnow, snow-producing thunderstorms, northeast of Des Moines.  Thundersnow storms produce large amounts of snow over a small area very rapidly.  Areas affected by these storms could see snowfall totals approach 25cm.

The storm comes on the heels of what many Americans regard as the beginning of spring; the return to Daylight Saving Time.  People in the US, with exception of Arizona and Hawaii set their clocks ahead one hour before going to bed tonight.  Daylight Saving Time officially returns at 2:00am Sunday local time.