Home > News > Another weekend coming & another nor... 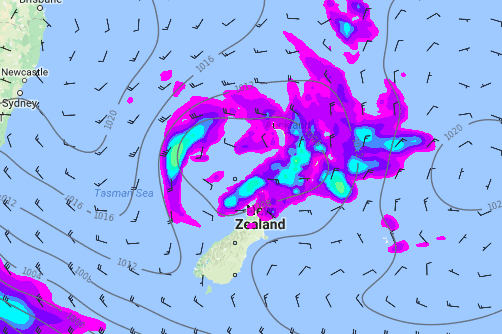 Eastern parts of the South Island remain drier than average while northern New Zealand is getting sick of the wet weather and gloom – and this coming weekend sees yet another couple of cloudy days with downpours here and there. It may be enough to drive northerners a little crazy with the lack of sunshine lately and an increase in heavy downpours.

The east of the South Island will see a little chance of rain this week – around Friday and Saturday the chance for rain is moderate to high (around 60 or 70%).

Rainwise and there isn’t a huge amount of wet weather coming this week for northern New Zealand but it’s by no means a dry week with showers about today, maybe on Wednesday and then again around Friday or Saturday. Dry and sunny spells should be in between.

The low this weekend looks fairly week – but based on the maps today the coming weekend may be fairly cloudy again with localised showers across much of the North Island. Clearly the mountains and ranges will break things up even further.

Yesterday turned out to be much drier in Auckland and Northland and other northern regions with the rain band mostly triggering out at sea as it cleared to the east – however those further south around the Hauraki Plains reported significant downpours, heavy enough to slow traffic.

The low this coming weekend looks to cover much of the North Island and may bring some rain into the upper South Island. It’s not a storm and no severe weather looks associated with it at this stage – the rain bands also look fairly broken up.