Home > News > Another spring like week on the way... 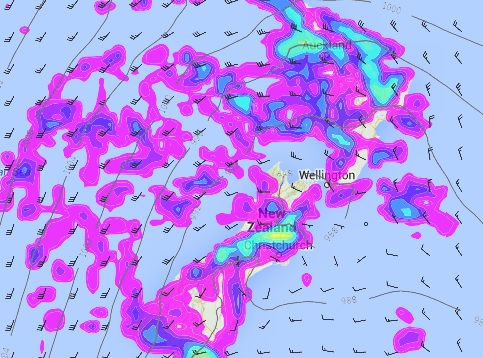 This coming week will be very spring like, it would be nice if that meant warm weather and it will for a time but it also means that winter wants to remind us it isnâ€™t quite done yet. And my favourite, thunderstorms are likely somewhere at some point.

On Monday a westerly airflow covers the country, warm and sunny out east with areas of cloud in the west. Rain for the West Coast of the South Island and the odd light shower further north. Auckland and Northland should remain dry though. Watch for showers or some rain about Southland / south of Otago Peninsula in the east afternoon and evening for a time too.

Tuesday sees a northwesterly airflow build, still warm and dry in the east with rain in the west of the South Island. Showers gradually push northwards along the North Islands west coast. Expect showers for Southland, moving into Otago during the afternoon with thunderstorms and hail possible. There may be a few evening showers even push into Canterbury.

Wednesday sees showers across much of the North Island, heavy at times with hail / thunderstorms possible later on especially in the west. Winds fresh from the west or southwest. The South Island has a gentle southwesterly airflow, many regions Canterbury northwards could become unstable in the afternoon with thunderstorms and hail due to light converging winds near the surface and cold unstable upper air. Itâ€™s not a guarantee of storms near you as they are often isolated in nature but the risk is there.

Southland and Otago sees freshening southwesterlies with showers moving in, a risk of hail too.

Thursday has cool southwesterlies covering the country, isolated showers for many mainly afternoon onwards and with a risk of hail still. But some areas will see long sunny areas too. The west of the North Island from Taranaki through to Northland looks a good bet for showers and strong west to southwest winds for much of the day however. Friday sees conditions overall easing as a ridge starts to move in but there will still be some cloud and a few showers about.

Looking forward to it!