Another significant rain event on horizon – this time for both islands 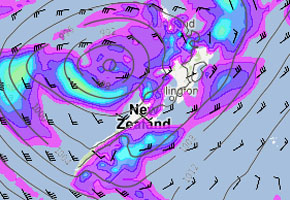 WeatherWatch.co.nz forecasters say another significant rain event is on the horizon as yet another large, and this time deeper, Tasman Sea low is predicted.

The low is expected to linger for several days held up by a large blocking high to the east. Head weather analyst Philip Duncan says farmers and local authorities should be closely tracking the incoming low.

But despite the wet forecast for some parts of New Zealand rain will be just what the doctor ordered for those in the south . “We’ve been monitoring the data and at this stage we now think the eastern coastline of the South Island could expect significant rain next week, something many farmers will be happy about”. Mr Duncan says parts of Otago and South Canterbury are well below normal rainfall figures for this time of the year.

However the wet South Island forecast does come with one catch. “This rain is what we describe as cold rain, that means temperatures will be in the single digits and snow can also be expected above a few hundred metres”.

Snow to lower levels was not in the forecast at the time this story was written.

WeatherWatch.co.nz forecaster Aaron Wilkinson, who is based in Christchurch, says it could be a very unpleasant week for newborn lambs.  “We’ll have the rain but it will be accompanied by sleet inland and highs across coastal Otago and Canterbury will struggle to climb much above 7 degrees.  The wind chill may cause them some stress”.

As for snow, more updates would be needed says Mr Wilkinson, but snow to sea level was looking unlikely.

While some areas will have cold southerlies the general air flow isn’t coming from Antarctica, instead it’s all caught up in the large Tasman low which will reach over the country and drive in cold air from the east of the South Island – that wind flow locally will be in the form of a south easterly wind.

The air flow that brought snow to many parts of New Zealand last August was caused by air coming off Antarctica.

But while the South Island shivers next week the North Island – in particular northern regions – are likely to be enjoying above average temperatures thanks to a warm flow that should tap into the sub-tropics again.

“Temperatures will be above average for the upper North Island, especially overnight lows. The bad news is that doesn’t mean good snow conditions for the central North Island skifields and they could do with another burst of snow” says Mr Wilkinson.

WeatherWatch.co.nz says rain clouds could roll in as early as this Sunday and linger for some areas until the end of next week.

A week of solid rain is not forecast but each day has a high risk of rain at some point, with some days much wetter than others. A few regions may be fairly sheltered from the rain clouds too – but further updates were needed before confirming exactly where the rain will and won’t fall.