Home > News > Another brush with an ex-cyclone coming?...

Another brush with an ex-cyclone coming? 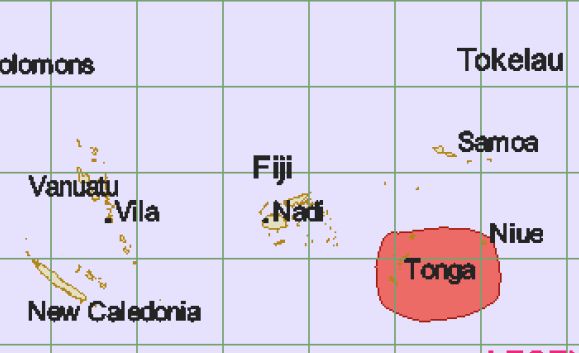 It hasn’t even become a tropical storm yet but already WeatherWatch.co.nz forecasters say a developing low near Tonga is one for New Zealanders to watch.

The Fiji Meteorological Service says the tropical disturbance has a moderate chance of becoming a tropical cyclone in the next few days.

WeatherWatch.co.nz says the formation of a tropical storm is highly likely this week and models have been fairly consistent with the direction it will track – south west towards New Zealand’s North Island.

But the models don’t agree on one important aspect – just how close it will get.

Last week data suggested it would only reach within 1500km/s of East Cape.  Today that same data is suggesting it may be as close as 500kms.

However there is one significant saving grace for those who cannot cope with more rain – a large high should be over the country to push back against it.

In spring WeatherWatch.co.nz predicted New Zealand would be at an increased risk of an ex-cyclone this summer.  So far we’ve had one already, Fina in December.

NIWA says overall New Zealand is at a reduced chance of cyclones this summer, simply because overall this cyclone season should be quieter.  The season started in November and as of today Fina is the only named storm so far in the south west Pacific.

“The longest day was back in December but it takes a couple of months for the sea surface temperatures to peak – which they do in February.  The warmer the sea the easier it is for cyclones to form”.

And Mr Duncan has a warning for those going to the beach – check sea conditions before going for a swim.  “While this potential cyclone currently shows no signs of directly hitting us these storms do have a proven history of creating deadly rips along our east coast – even if the weather at the beach is sunny and calm”.

Mr Duncan says the last cyclone to nearly drown a number of swimmers was Atu, which passed by the North Island’s east coast the same day as the February 22nd Christchurch earthquake last year.  “Several swimmers were caught in very dangerous rips that day as Atu churned offshore – but the weather on land was stunning.  They were lucky to be saved.  So even if the weather is great, check the local sea conditions before going for a swim”.

WeatherWatch.co.nz will continue to monitor the models and update again later in the week.