And now to the forecast for Mars…. 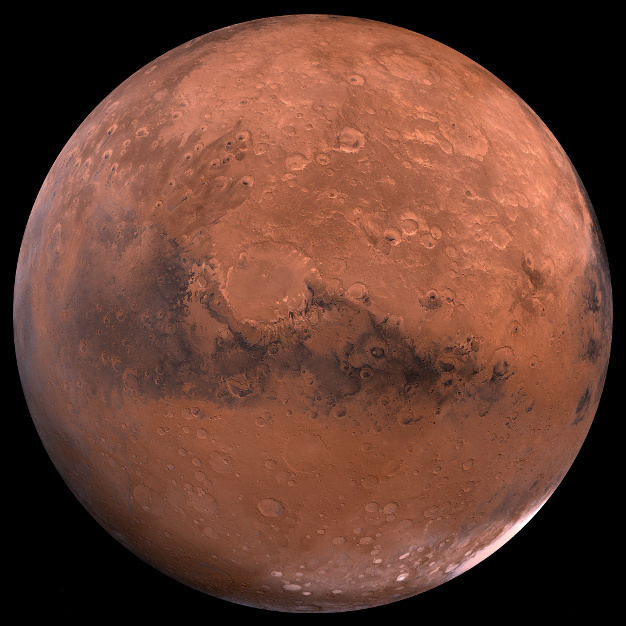 Weather forecasts may soon be issued for Mars, at least for the snowstorms that occasionally whip over the northern hemisphere of our neighbour planet during the icy cold winters and could be predicted several weeks in advance, say researchers from the Tohoku University in Sendai, Japan, and the Max Planck Institute for Solar System Research (MPS) in Katlenburg-Lindau, Germany, in their newest publication.

For the first time, the scientists’ calculations show a connection between these snowfalls and a special Martian weather phenomenon: fluctuations of pressure, temperature, wind speeds, and directions that in the northern hemisphere propagate in a wave-like manner and occur very regularly. For missions to the red planet exploring this region with rovers, such weather forecasts would offer the possibility of choosing a route that avoids heavy snow storms.

The Martian polar regions are an icy cold world. Similar to those on Earth they are covered by cohesive ice caps. In winter, when the temperatures drop below -128 degrees Celsius, this layer of ice is mainly supplied by frozen carbon dioxide from the atmosphere. The ice caps then cover a region reaching south to about 70 degrees northern latitude. Only in the comparably warm Martian summer the carbon dioxide sublimates revealing the planet’s eternal ice: a considerably smaller cap of frozen water.

“Mars’ seasonal ice has two different origins,” says Dr. Paul Hartogh from the MPS. “A part of the carbon dioxide from the atmosphere condensates directly on the surface — similar to the way a layer of frost forms on Earth in cold, clear weather. Another part freezes in the atmosphere,” he adds. The tiny ice crystals accumulate into clouds and fall to the ground as snow. In the new study, the researchers were now for the first time able to establish a connection between the occurrence of such ice clouds and a wave-like weather phenomenon characterized by a periodic change of pressure, temperature, wind speed, and direction.

“This weather phenomenon on Mars is unique,” says Dr. Alexander Medvedev from the MPS. Indeed, these so-called planetary waves can also be found in Earth’s meteorology, but are much weaker here. Due to the planetary waves the temperatures in the Martian atmosphere regularly oscillate around values notably below -128 degrees Celsius — the temperature at which carbon dioxide gas freezes.

For their simulations, Dr. Takeshi Kuroda from the Tohoku University and his colleagues from the MPS used an established climate model that they adapted to the special conditions on Mars. “The calculations need to take into account the large amounts of dust in the Martian atmosphere,” says Kuroda, who worked at the MPS until 2009 where he also received his PhD. In addition, the Martian atmosphere consists of more than 95 percent of carbon dioxide.

In the researchers’ opinion, the new results could help to reliably predict snowstorms on Mars. “Everyone knows from experience that on Earth reliable weather forecasts are only possible for a time span of five to seven days at most,” says Medvedev. “It is simply impossible to calculate whether or not it will snow somewhere on Earth 20 or 40 days in advance.” On Mars this is different. The simulations show that in certain regions on Mars snow falls can be predicted far in advance.