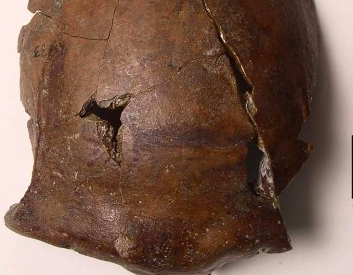 An ancient skull dating back more than 6,000 years may have belonged to the earliest known human victim of a tsunami, scientists say.

The Aitape skull — named after a small coastal town in the north of Papua New Guinea, where it was found — was discovered in 1929 by Australian geologist Paul S. Hossfeld. Since then, archaeologists and anthropologists have been trying to unravel the circumstances that resulted in it ending up there.
The most recent study, published Wednesday, suggests the skull may have belonged to a human who drowned in a tsunami or had his or her grave displaced by the tsunami’s waves.

When Gossfield stumbled upon the skull in 1929, he mistakenly believed it belonged to Homo erectus, a prehistoric species of humans originating in Africa.
But radiocarbon dating has shown it is, in fact, much younger, dating back 5,000 to 6,000 years.
The area around Papua New Guinea is prone to tectonic disturbances, and often affected by natural disasters like tsunamis and earthquakes. More than 3,000 people died in 1998 when a tsunami struck the region near Aitape.
Because sea levels were higher thousands of years ago, the remains probably originated from the area behind what would then have been the shoreline.
In 2014, Ethan Cochrane and Mark Golitko led a team of researchers back to the location where Gossfield had found the skull more than 90 years ago.
“We have now been able to confirm what we have long suspected,” said James Goff, the study’s lead author.
“The geological similarities between the sediments at the place where the skull was found and sediments laid down during the 1998 tsunami that hit this same coastline have made us realize that human populations in this area have been affected by these massive inundations for thousands of years.”

The discovery will help anthropologists understand how people adapt and thrive in coastal areas that are subject to these natural hazards, and why they chose to move into such areas and remain there despite the environmental dangers.
“It might be because the New Guinea north coast is also very productive at this time in terms of food resources,” explained Cochrane, a senior lecturer at the University of Auckland. “So perhaps people are balancing risk and food reward.
“Understanding these kind of adaptive tradeoffs will be key to mitigating risk and ensuring the livelihoods of coastal populations today,” he added.

The Papua New Guinea region is vulnerable to techtonic disturbances. A 7.9-magnitude quake struck the area in 2016.
The new study, published in the peer-reviewed journal PLOS ONE, adds to a trail of research that has seen contributions by scientists from France, the UK, Australia, Papua New Guinea and New Zealand.
“If we are right about how this person had died … we have dramatic proof that living by the sea isn’t always a life of beautiful golden sunsets and great surfing conditions,” said its co-author John Terrell, Regenstein curator of Pacific anthropology at the Field Museum in Chicago.
Terrell, who has conducted extensive research in Papua New Guinea, also noted that the skull might help convince skeptics “that all of us on earth must take climate change and rising sea levels seriously.”
“Many people in the world today face the threat of rising sea levels and (the) increasing numbers and power of climatic events, like tsunamis,” added Marta Mirazon Lahr, from the Leverhulme Centre for Human Evolutionary Studies at the University of Cambridge, noting that almost 80% of the world’s population today lives near the coast.
-By Manisha Ganguly, CNN.COM