America’s fascination with the groundhog 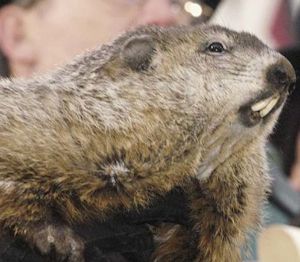 Every February 2nd, it happens.  In a tiny town about an hour and half from Pittsburgh, Pennsylvania a rodent is called upon to forecast the weather.

February 2nd is Groundhog Day in the United States and Canada.  As the custom goes, if the groundhog, named Punxsutawney Phil, emerges from hibernation to see his own shadow, he will take this as a sign of six more weeks of winter, and return to his burrow. Early spring arrives if he does not see his shadow, causing Phil to remain above ground. The legend of Groundhog Day is based on an old Scottish couplet: “If Candlemas Day is bright and clear, there’ll be two winters in the year.”

But Phil isn’t the only prognosticating whistle-pig.  There are several woodchucks around North America that give seconding guessing Ma Nature a fair-go.

There’s Jimmy in Wisconsin.  Woody in Michigan.  Hotsville Hal in New York.  Buckeye Chuck in Ohio.  The list goes on and on.

So how accurate are these buck-toothed atmospheric scientists?  About as accurate as one might expect anyone to be when guessing the weather six weeks into the future.  While some groundhogs are said to have an 80% accuracy, those tales seem about as tall as the ones told about the groundhog’s accurately predicting the outcome of professional sporting events.  Like the championship of professional American football, the Super Bowl.

Which just happens to be this weekend as well.