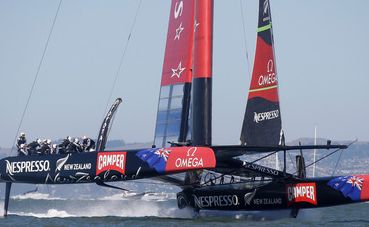 After yet another frustrating day on the water for Emirates Team New Zealand in San Francisco, the weather looks more promising for tomorrow’s racing as they look to clinch the 34th America’s Cup with one more race win.

Today’s racing was abandoned after the wind failed to shift from a southerly to a westerly.

Tomorrow’s forecast is for much more “normal” San Francisco conditions, with westerly winds of 14-17 knots predicted. A flood tide will add a positive current factor.

Oracle Team USA will have the favoured port entry in both scheduled races which are set for 8.10am and 9.10am respectively.

Today’s programme had already been cut back to just one race after the start of race 14 was delayed due to an unusual set of weather conditions on San Francisco Bay.

But by 9.40am – the latest possible opportunity to get a race away – the conditions still weren’t conducive for fair racing and so it was called off for the day.

In another unexpected twist to a regatta that has already delivered several surprises, the problem today was the famously predictable San Francisco Bay breeze that always comes in from the west was blowing from the south, meaning organisers were unable to set the course until it shifted. It’s all due to a front that has rolled into the Bay, bringing with it rain, which is unusual for San Francisco in September, and light and variable winds from the south.