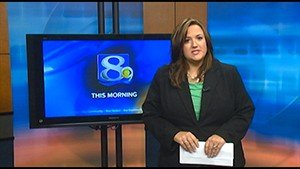 A TV news presenter at a station in La Crosse, Wisconsin is getting international attention today after her response to a viewer who attacked her because of her weight.

Jennifer Livingston, morning news presenter at WKBT-TV received an email on Friday criticising her for being overweight.  The email said that he was surprised Jennifer’s “physical condition hasn’t improved for many years”.  The viewer, whom Jennifer did not identify, went on to say that she was not “a suitable example for this community’s young people, girls in particular”.

She acknowledged that she is overweight, saying “yes, even obese on a doctor’s chart”.

She went on, directing her comments to the author of the email, “Do you think I don’t know that? That your cruel words are pointing out something that I don’t see?  You don’t know me. You are not a friend of mine. You are not a part of my family, and you have admitted you don’t watch this show.  You know nothing about me but what you see on the outside, and I am much more than a number on a scale.”

Then she turned it into an anti-bullying message, pointing out that October is any-bullying month.

She said “That man’s words mean nothing to me, but really angers me about this is is there are children who don’t know better — who get emails as critical as the one I received or in many cases, even worse, each and every day.  The internet has become a weapon and is passed down from people like that man to those who don’t know any better.  If you are at home and you are talking about the fat news lady, guess what? Your children are probably going to go to school and call someone fat.”

The response has been astounding.  Jennifer is scheduled to appear on national news shows Wednesday morning US time.  Her video has become an internet sensation.  And talk show star Ellen DeGeneres has tweeted that she would like to meet Jennifer in person.

And if you are wondering why I keep referring to her by her first name, it’s because Jennifer is a friend of mine.  We worked together at WKBT-TV from 1999-2005.  So, I know her.  And I can tell you, while the world is seeing someone amazing…really, they’re just seeing the Jennifer that we all know and love.

I side with the emailer on this one and she should be fired for using the air time to vent her personal opinions. You are on stage…deal with it or get off.

I’m, sorry but what does this have to do with the weather?

On occasion we will cover stories that are not necessarily weather related if the topic is big enough.

This topic is huge in the US right now.  This presenter is one of the most talked about people in the US.  It’s been in the top 5 trending topics on Google and Yahoo for the last 2 days.  GIven how cyberbullying has been a huge topic here in NZ, I felt this was a topical issue.

The other thing is that this relates directly to things that have been talked about here on WeatherWatch regarding tv personalities and the public’s perception of them.

Rock on Jennifer – no more judging and bullying of each other. Well said.

Stand and take a bow Jennifer. You shot that nasty horrible person down with those simple but factual words. I would suggect that this man will be a lonely, sad, insecure being because with an attitude like that, he must surely be single. To the man..and I use the term man loosely in this case, because he doesn’t represent the views of a modern civilisation, retreat back to the hole you came out of….its 2012 not 1912.

Inspirational – but I bet the person that wrote that email, still won’t ‘get’ it.

Sadly, I think you are right.

But hopefully, it will make other people stop and think before doing what this guy did.