America braces for another snow storm 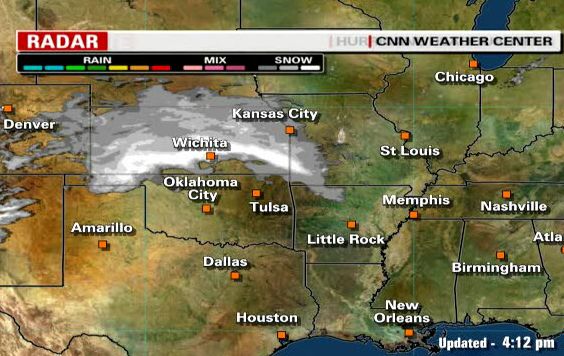 Snow began falling over Colorado and Kansas Tuesday as yet another round of winter weather began marching across the United States barely a week after a record-setting winter storm roared across the Midwest.

A powerful weather system poised over the Rockies is forecast to dump several feet of snow in the Mountain West and up to 25cms in some parts of Oklahoma, forecasters said.

Much of Oklahoma is under a winter storm warning, but snow and sleet are predicted as far south as central Texas, with 5 to 10cms expected to coat the Dallas-Fort Worth area, the National Weather Service said.

Later in the week, the system is expected to bring rain and snow to many areas of the Deep South before delivering a wintry mix along portions of the East Coast by Thursday.

Snow is expected to spread into Oklahoma and north Texas Wednesday and into Wednesday night, said CNN meteorologist Dave Hennen. By Wednesday, it also will begin spreading into the Southeast. Cities like Memphis, Tennessee, and Little Rock, Arkansas, could see 10 to 20cms of snow, while lesser amounts are expected in Nashville; Birmingham, Alabama; and Atlanta.

Bitterly cold temperatures will lock the center of the country in the deep freeze as the system moves east.

“Maximum temperature departures are expected to run 30F to 40F degrees below average for the central U.S. (Tuesday) with the same departures sinking south into Oklahoma and north Texas on Wednesday,” the Weather Service said.

A historic storm left its mark on at least 30 states last week, dumping about 60cms of snow on the Chicago area and prompting Oklahoma’s governor to declare a state of emergency.

Another winter system at the end of the week left central and southern Texas a mess.

Ice caused 800 crashes across the Houston metropolitan area, and many freeways were closed because they were too dangerous to navigate, CNN affiliate KPRC reported.

Hundreds of flights were canceled as the winter weather threatened the plans of Super Bowl enthusiasts headed for the game last Sunday in Arlington, Texas.