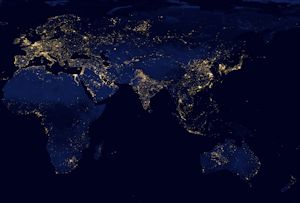 How does the globe look when the sun goes down?  Earlier this month, scientists unveiled unprecedented snapshots of Earth at night. Global composite images, constructed from cloud-free nighttime images from the new NOAA-NASA Suomi NPP satellite, were showcased at the American Geophysical Union’s annual meeting in San Francisco. The images reveal the glow of human and natural phenomena across the entire Earth in more detail than ever before.

Many of today’s satellites are equipped to look at Earth during the day, when they can observe relatively bright objects  â”€ especially those illuminated by the sun. But the “day-night band” of the Visible Infrared Imaging Radiometer Suite (VIIRS) instrument on the Suomi NPP satellite is equipped with advanced technology that extends the view of Earth’s atmosphere and surface into the nighttime hours.

In the new images, the first things to capture the eye are the planet’s cities

“Nothing tells us more about the spread of humans across the Earth than city lights,” said NOAA’s Chris Elvidge. Elvidge has studied nighttime lights data since 1992, with satellite images far less precise than the news ones. “Even after 20 years, I’m always amazed at what city light images show us about human activity.”

Unlike a camera that captures a picture in one exposure, the day-night band produces an image by repeatedly scanning a scene and resolving it as millions of individual picture elements or pixels. The day-night band goes further, however, to ensure that each pixel collects the right amount of light. If a pixel is very bright, a low-gain mode prevents the pixel from oversaturating. If the pixel is very dark, the signal will be strongly amplified.

“NOAA’s National Weather Service is continuing to explore the use of the day-night band,” said Mitch Goldberg, program scientist for NOAA’s Joint Polar Satellite System, JPSS. “The very high resolution from VIIRS data will take forecasting weather events at night to a much higher level.”

For example, the VIIRS day-night band watched the recent storm Sandy, illuminated by moonlight, as it made landfall over New Jersey on the evening of Oct. 29. Night time images showed the widespread power outages that left millions in darkness in the wake of the tremendous storm. By revealing such impacts of disaster on human life, the Suomi NPP imagery makes for a more complete view of storms like Sandy, which were previously observed primarily with infrared bands.

Other phenomena observable with the day-night band become evident only at night. City lights reveal the human footprint on Earth in striking detail, which researchers have used to model the spatial distribution of economic activity. Carbon dioxide emissions from natural gas flares can be measured quantitatively. Fishing boats offshore in the Yellow and East China seas are seen to orient along political boundaries.

VIIRS is not the first instrument to look at nighttime lights. The U.S. Defense Meteorological Satellite Program has made observations with low-light sensors for 40 years. NOAA’s well-known nighttime lights images derive from those satellite data. The new VIIRS day-night band can better detect and resolve Earth’s night lights; it is sensitive enough to detect lights as small as a single street lamp and even the nocturnal glow produced by the Earth’s own atmosphere.

You can see all the images at http://earthobservatory.nasa.gov/NightLights.

So is this then suggeting that North Korea using little to no electricity?