Alexandra mops up after ‘spectacular’ thunderstorm 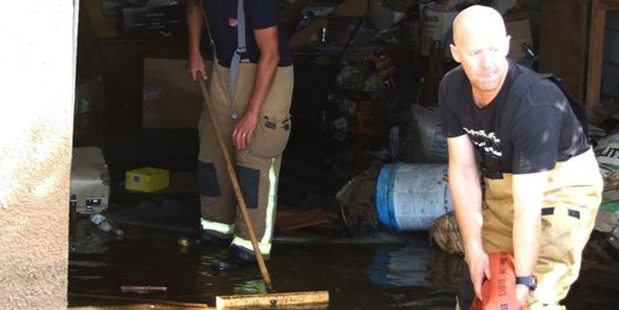 Home and business owners were mopping up yesterday ready to assess the damage after an hour long thunderstorm hammered Alexandra, doubling the town’s fire brigade calls for the year.

The spectacular storm on Saturday night was accompanied by 24mm of rain in an hour, causing widespread surface flooding in the town.

Alexandra Volunteer Fire Brigade Chief Fire Officer Russell Anderson said the brigade received 34 calls as a result of the flooding – matching the number of calls it had already attended so far this year.

”The calls were all around the town, no one area in particular, businesses and homes, and initially it was limited as to what we could do to help. You can’t pump water out of one place into someone else’s place if everywhere is flooded but once the streets started to clear of water we were able to pump some away.”

Home spoutings struggled to cope with the volume of water and basement garages were hard hit with floodwaters flowing in, he said.

MetService figures showed 24mm of rain fell in Alexandra in an hour. During that time, the Alexandra airport, between Alexandra and Clyde, received 7mm of rain.

Sheet lightning was to the fore but much of the forked lightning was probably masked by clouds. Business and home owners the Otago Daily Times talked to yesterday said their priority was cleaning up.

They were likely to assess the damage and make insurance claims today. The Alexandra Medical Centre – the base for all the town’s doctors – was one of the hardest hit properties. A blocked drain outside meant floodwaters flowed under the doors of the adjacent Alexandra Pharmacy and into about a third of the medical centre building.

”Luckily, most things are up off the floor, so it’s just a matter of sweeping it all out and drying the carpets,” part owner of the building Malcolm Macpherson said. The medical centre was back in business yesterday. Jae Cleaning Central Otago tended to about 30 floods ”of varying degrees”, co owner Fiona Brosnan said. Four staff were drying carpets, she said.

Mops were selling well at Mitre 10 Alexandra yesterday, co owner Kerry McAuley said. Staff had been doing some mopping up themselves, before the shop was opened for the day.

Water had seeped into the shop, getting under the vinyl flooring and some stock in cartons on the floor was damaged by floodwaters, she said.

The extent of the damage had yet to be assessed. Patrons of the Criterion Club Hotel watched as water ”poured” into the building through the roof and light fittings, co owner Melissa Flannery said.

”Our poor cook was up to her ankles in floodwater before long. The flooding killed our TAB terminal, too, but it’s up and running again now,” she said.”

There was ”a nice crowd in” but the hotel had to be closed early for the evening because of the flood. However, it was business as usual yesterday, after the clean up.

The Alexandra fire brigade helped Shirley Wright yesterday after she opened the door of her basement garage ”and saw things floating”.

The garage had only flooded once before in the 32 years she had lived in the house. There was no car in the garage and Mrs Wright was philosophical about the other saturated items .

”There’s nothing too important there,” she said.