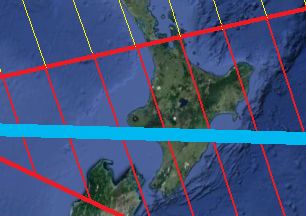 Full news update plus maps and graphic — It’s calm, cold and ‘eerie’ across much of the country tonight – that’s what WeatherWatch.co.nz readers are telling us as the air pressure continues to slowly sink over the country ahead of an incoming and developing low.

The centre of the, low which is rapidly deepening in the Tasman Sea, now lies about 450kms west of Taranaki.

WeatherWatch.co.nz says the centre of the low is likely to track near Wanganui, Palmerston North and Napier overnight.  Severe gales extend 300kms north and south of the centre.

Beyond that – and to the north – gales and blustery conditions will extend a further 400kms.

This puts the bulk of the severe gales on the borderline of Auckland – and this evening MetService extended a wind warning into the city, with gusts up to 120km/h forecast, matching WeatherWatch.co.nz’s prediction earlier today.

But the zone of severe gales – which stretches 300kms north and south of the low (and the low is tracking from west to east) – will affect numerous regions: Waikato, Bay of Plenty, Gisborne, Central Plateau, Hawkes Bay, Taranaki, Wanganui, Manawatu, Wairarapa, Wellington, Nelson and Marlborough – also the northern edge of Canterbury.

WeatherWatch.co.nz estimates the winds will move in during the early hours of Saturday morning than quickly build towards dawn.  “It’s basically like a giant squall” says head weather analyst Philip Duncan.  “When we think of storms we often think of rain and wind for a long time – but this may be in and out in less than 12 hours – even 6 hours for some, which is somewhat unsual”.

Mr Duncan says when the winds hit the North Island’s west coast in several hours time the low will still be deepening.  “The low will continue to deepen as it pushes into the North Island tomorrow morning – this means the worst of the weather is likely to affect central and eastern areas in the risk zone”.

Many WeatherWatch.co.nz readers are also talking about how cold it is where they are with fires and heaters being lit.

It’s currently around 16 and 17 degrees across Auckland, 14 in Hamilton, 12 in Wellington and Christchurch and 10 in Dunedin.

And it seems the animals know something is up too.  WeatherWatch.co.nz has received several reports of animals – and even some humans! – acting oddly.

“All four of my cats sat in the bathroom while I took a bath… I took photos to prove it” wrote Amber Downling on WeatherWatch.co.nz’s Facebook page this evening.

“Dog is calm, chilling beside me, cat has gone MENTAL!!” wrote Jo Hill.

“Dogs been following us round all night! Raining here. Temp has really dropped. Dogs been acting strange since about midday” wrote Tasha Jeffries.

But our favourite was this one from James Isherwood “The dog is sitting quietly in the corner reading the paper smoking a pipe, I definitely think this isn’t normal but can’t be sure”. 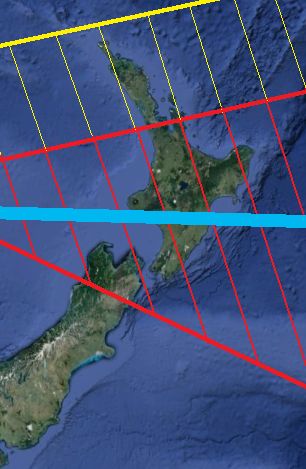 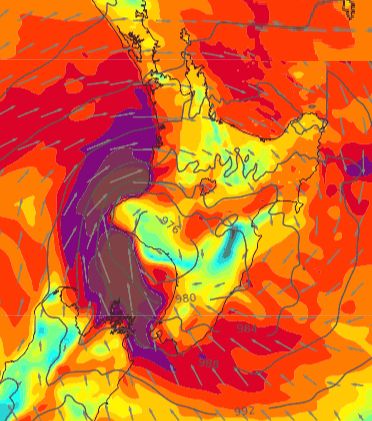 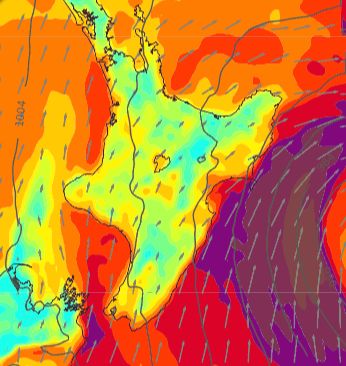 7pm Saturday – the storm very quickly crosses the country in less than 12 hours – severe gales indicated by reds and purples.

I reckon there a tail end it but quiet and slight drizzling here in timaru., and my cat tried to jump in the bath LOL mayb he wants ta lern to swim? Ha, let me know what goin here in timaru, its really werid havin a redish blak sky at nite

1:00am and the wind has started up in Papakura. Some constant showers – is it strange to wish that it will be a doozie ……. Some excitement after a really dull summer ………..

It is 1220am, really should be in bed! Just wanted to report that it has been light rain most of the day. As I sit here typing this I can hear the rain getting heavier. No wind.
I agree that it is a bit eerie. It seems people have taken the warnings seriously because my partner and I were the only ones driving through Papamoa about and hour ago. Town felt dead!

Steady rain and wind getting up here in Torbay north shore. Power been out since just before midnight. Not sure if it’s related. Certainly stopped a big party up the road very quickly that’s for sure. Wonder how bad it will get

No wind either, related?

Just drizzling out west Auckland. And very quite. Not much traffic on road. Haven’t heard of trains operating. Anyone knows if trains are still running?

hey philip anymore updates what is the latest

I am in Henderson. It is drizzling and very quite at the moment.