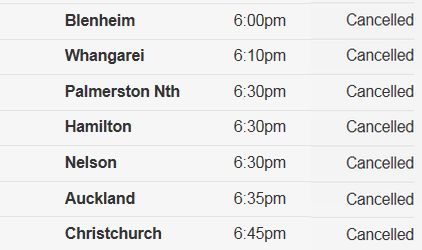 Severe gales gusting over 140km/h have this evening returned to Wellington City after a lull in severe gales for a time this afternoon.

The late rise in winds – most likely the final blast before winds ease overnight – arrived at the end of the business day and flights in and out of the capital are now mostly cancelled, leaving passengers stranded across the country.

Similar winds hit the city first thing this morning cancelling and delaying flights until the severe gales eased for a time late morning and across the afternoon.

WeatherWatch.co.nz estimates winds are over 200km/h for pilots flying in to the city above the ranges.

Inland Canterbury saw gusts between 100 and 150km/h, knocking down trees and again cutting power – including to our very own weather analyst Aaron Wilkinson, who had to operate off back-up battery supply for the second time in a month.

However, as often happens with the Canterbury nor’wester, the worst of the winds didn’t make it to Christchurch Airport or the coast.

Strong winds are this evening blowing in Dunedin and Auckland but are mostly below flight delay threshold.

Winds will pick up overnight across many North Island areas but winds become much lighter for central New Zealand on Tuesday.