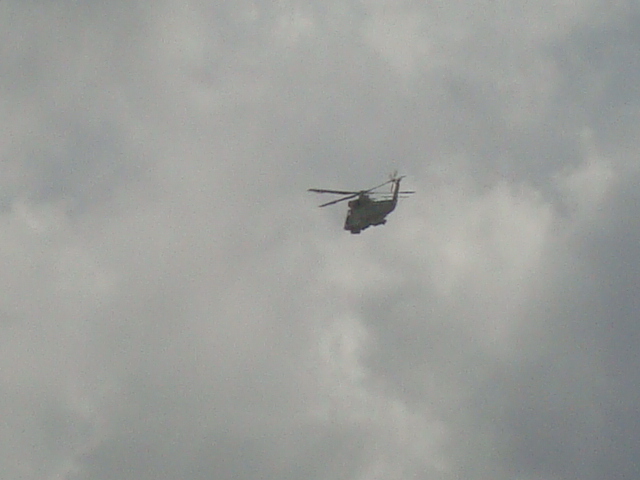 The Chief of Air Force says today’s helicopter tragedy marks the loss of three more men in tragic circumstances on Anzac Day, and says it is the worst tragedy they have had to face.

The names of the crew who died this morning when their Iroquois helicopter crashed have been released: Flight Lieutenant Hayden Madsen, Corporal Benjamin Carson and Flying Officer Daniel Gregory. Two were aged in their 20’s and one in his early thirties..

They were flying in formation when the crash occurred on a farm north of Wellington. The Air Force says it is to early to speculate on how the crash might have happened, but mist and heavy fog in the area at the time may have been contributing factors.

Recovery teams have been removing the first of the three bodies from the wreckage, carrying it out on foot.

A fourth man has been flown to Wellington Hospital and is in what is described as a serious but stable condition.

The Iroquois was one of three flying from Ohakea to Wellington to take part in an Anzac Day fly past. It slammed into a hillside at Pukerua Bay, near Wellington.

Police Inspector John Spence says the wreckage is lying in a narrow gully on a very steep slope, making it extremely difficult to get to. He says it is easiest to access by winching rescuers down from a helicopter, but conditions in the area are not favourable for that.

Mist is again obscuring the crash site and there are blustery winds.

Inspector Spence is praising the crew of the Westpac Rescue Helicopter, saying it took some pretty impressive flying to winch a paramedic down this morning. The paramedic was able to confirm three crew had died instantly in the crash, and winched the fourth aboard the rescue chopper.

Our reporter at the crash site says the helicopter is upside down and appears to have hit the ground with significant force, as both the tail rotor and the cockpit have been ripped off. He says it is a miracle anyone survived.

Graham McLauchlan can see the crash site from his home, and heard the helicopter just before it crashed. He says the wreckage is spread over the south side of the hill. Mr McLauchlan says if the Iroquois was supposed to be heading south to Wellington, it should not have been flying over that area.

Defence Minister Wayne Mapp says the deaths are brutal news, particularly coming on Anzac Day and in what has already been a very difficult year for the Air Force. The Air Force has already lost Staff Sergeant Andrew Forster and Squadron Leader Nick Cree in accidents.

The Prime Minister says he is shocked and saddened. Mr Key is in Gallipoli to commemorate the 95th anniversary of the landings by Australian and New Zealand forces there. He says to have this happen when the helicopter was heading to Wellington for an Anzac Day flypast is an absolute tragedy.

Mr Key says his thoughts, as will be those of all New Zealanders, are with the families of the victims, the injured man, and the entire New Zealand Defence Force.