Ahoy September – Thar be more weather on the way 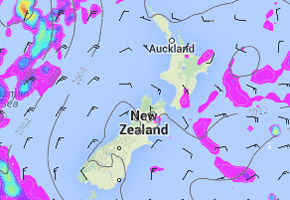 Well the weather never does stop, it keeps coming be it sunny or wet, windy or calm. And in the case of a certain Michael from Auckland itâ€™s never ending southwesterlies with cloudy skies and showers at times, which I actually find quite amusing. You can even join the Weather Complaining community on facebook set up by Michael. Lets have a look at how the first week in September is shaping up.

Tuesday sees a ridge covering the South Island still bringing mainly sunny weather for most. The east coast may see areas of morning cloud with a chance of early drizzle about coastal Marlborough then sunny spells increase in the afternoon, east to northeast winds. Expect some high cloud for Southland.

The North Island is mostly sunny in the west with southeasterly winds, chance of an early shower about Auckland and Northland then clearing. Expect periods of rain for the east coast, sunny spells about Wellington. Meanwhile a low pressure system enters the Tasman Sea.

A ridge covers much of the country on Wednesday. Mostly sunny for all western parts of the North Island with light winds, cloudy spells still affecting the east coast with the odd light shower about. The South Island is mostly sunny although high cloud does start to make its way northwards during the day, easterlies in the east with westerlies in the west.

The low mentioned on Tuesday that entered the Tasman Sea starts to move closer on Thursday, northeasterlies increase over the country with plenty of high cloud about the place. A front pushes onto Northland first thing in the morning bringing rain then works itâ€™s way southwards during the day reaching the lower North Island in the evening,

Mainly dry for the South Island although in the evening some rain moves into Tasman, Nelson and Marlborough.

Friday is looking a bit messy as the low starts to push onto the North Island then crosses later in the day, most regions will see rain or showers for a time but long dry spells with sunny breaks look likely for some too. The West Coast of the South Island may work out to be the driest as the airflow is very much from the southeast when this low moves through.

Admit its a bit of a fun page,but generally interested in the science of the weather too.and yes enjoy thunderstorms and would love it to snow plus like the sun even if crisp day.