After space jump, what’s the next big stunt? 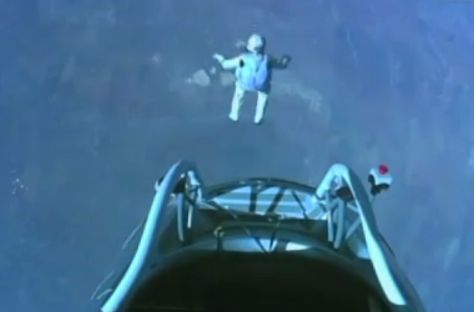 Felix Baumgartner jumped from the edge of space. James Cameron plunged to the ocean’s lowest depths.

Call them daredevils, explorers, neither or both. No matter what, their record-breaking solo feats, backed up by teams of specialists, literally raised and lowered the bar for human achievement.

So, for others aspiring to chart new terrain, what’s next?

CNN asked for your ideas.

Martin Samuels and John O’Connor wrote us on Facebook, saying it’s time to work on getting lower. Way, way lower.

Journey to the centre of the Earth

“Journey down in to the center of Earth,” wrote Samuels. O’Connor added, “Jules Verne for real!”

That may be a very, very, very long way away, but downward steps are already being taken in that direction.

A new $1 billion mission plans to drill 3.7 miles beneath the sea floor to reach the Earth’s mantle, a nearly 1,900-mile-thick layer of slowly deforming rock between the crust and the core, which makes up the majority of the planet.

What we learn below can go a long way toward showing us what’s above. The deepest crack found in the Earth’s crust, on the Caribbean Sea floor, included signs of life — which could indicate that alien life could exist on other planets, according to NASA.

“Obviously, the first person to set foot on Mars is the next big story,” wrote Matt James Tiberius Kazan.

Again, a far jump (ha ha) from anything Baumgartner and Cameron have done, and more in the realm of astronauts’ incredible achievements — but, again, a big new goal explorers are working on.

In fact, it could happen within 20 to 30 years, according to Charles Elachi, director of NASA’s Jet Propulsion Laboratory.

“I think engineering-wise, we know how to do it to some level. We still need a lot of development and a few inventions to do that,” Elachi told CNN. “So at the end it would become a question of national will if we want to keep our exploration, expand our vision and expand our exploration in the next 20 to 30 years.”

In the meantime, NASA is celebrating the success of the Mars rover Curiosity.

Much closer to home, Andrew Creech writes, “the next step is individual atmosphere re-entry. That would be an amazing feat!”

It would — and Baumgartner’s jump may have gotten experts closer to making that happen.

“The long-term hope is that we can one day develop a suit that would allow a human to reenter the atmosphere from space without the help of a spaceship,” Forbes wrote. In a blog post before Baumgartner’s jump, Forbes said if the event was successful it would “be a big step forward.”

Re-entering Earth’s atmosphere can be like splashing into a lake, the Federal Aviation Administration explains. It’s “a dense, fluid medium, which, at orbital velocities, is not all that different from a lake’s surface.”

Astronauts have to hit the atmosphere at a precise angle and speed to avoid “a big ‘splash,’ which would mean a fiery end,” or a too shallow entry, which could send them skipping “off the atmosphere and back into the cold of space. This subtle dance between fire and ice is the science of atmospheric re-entry.”

One day, the hope is, a suit could help save the lives of astronauts forced to bail out of a malfunctioning rocket on its way to space.

To little surprise, some of our social media responses focused on politics.

Politicians should “go where no one has gone before and start cooperating with each other,” wrote Andreas Bojesen.

Video the video of the jump here via CNN