Home > News > A week of rain and storms ahead for Quee...

A week of rain and storms ahead for Queensland 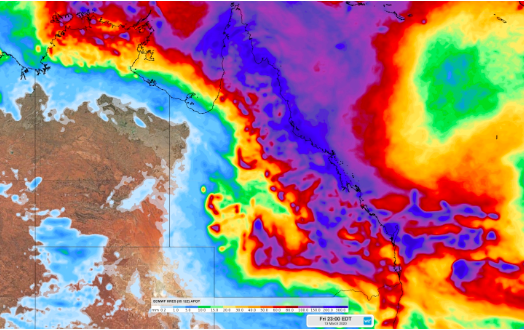 After days of flooding rain, Queensland is likely to see widespread showers and thunderstorms each day for at least the next week.

Tropical moisture associated with Ex-Tropical Cyclone Esther caused widespread rain over Queensland between Wednesday and Friday this week. Some areas in the state’s southwest received around 200mm of rain form this system, including 198mm in 48 hours at Thargomindah, their highest two day total in more than 130 years of records.

This week’s downpours combined with rain from recent weeks to cause flooding in a number of catchments across the state. At 11am on Friday, moderate to major flood warnings were in place for the Balonne, Warrego, Paroo, Bulloo, Barcoo Rivers and the Cooper and Eyre Creeks.

On Friday, a low pressure trough will continue to cause showers and thunderstorms over northern, central and eastern districts of Queensland, as drier weather returns to flooded western and southern inland areas. On Saturday, the trough will move further east, causing showers and storms to contract towards the coast.

However, wet and stormy weather will become widespread across Queensland again from Sunday into next week as the low pressure trough backtracks and draws moisture-laden air across the state.

Image: Forecast accumulated rain during the next 8 days (Friday to Friday) according to the ECMWF-HRES model.

Widespread showers and thunderstorms are likely across Queensland from Sunday and through most of next week. Unlike this week’s rain, the coming week’s wet weather will primarily occur from thunderstorms, meaning rainfall will be hit and miss. Some places could see over 100mm and some places could stay dry.

There are also indications that a low pressure system or tropical cyclone could develop near Queensland’s eastern tropical coast mid-to-late next week. It’s too early to know how this system will develop just yet, but it’s worth keeping a close eye on during the coming week.