Home > News > A third of Bangladesh under water as flo...

A third of Bangladesh under water as flood devastation widens 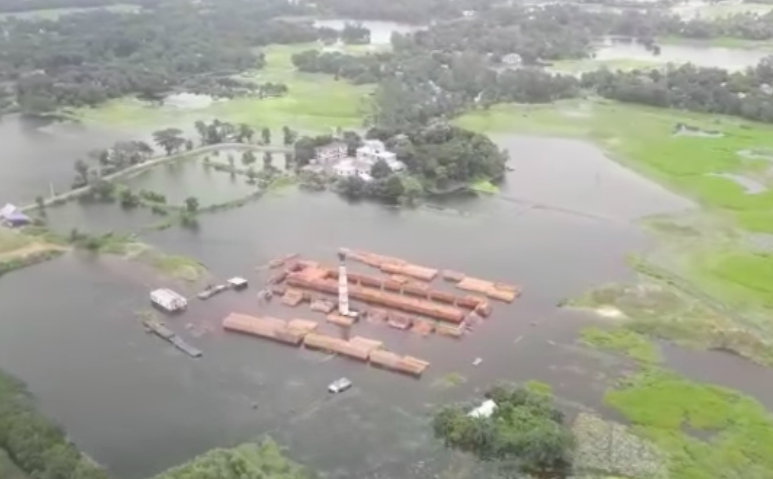 In rural areas across northern Bangladesh families are preparing to mark Eid al-Adha, one of the holiest dates on the Muslim calendar.

The holiday, which translates literally as the “sacrifice feast,” is intended to be a time of great celebration. In small villages and towns, such as Beraberi some 134 kilometers northwest of Dhaka, residents spent much of the last year hand-rearing goats and cows in anticipation of the annual festivities.
Then the rains began to fall.
As the world’s media trains its sights on the tragic events in Texas and Louisiana, another water-driven catastrophe is unfolding in villages like Beraberi throughout Bangladesh and parts of Nepal and India.
There, the International Federation of Red Cross and Red Crescent Societies (IFRC) estimates that at least 1,200 have died and more than 41 million people have been affected by monsoon rains and severe flooding as of June this year.

The rains are now moving northwest towards Pakistan, where more devastation is expected.

At its peak on August 11, the equivalent to almost a week’s worth of average rainfall during the summer monsoon season was dumped across parts of Bangladesh in the space of a few hours, according to the country’s Meteorological Department, forcing villagers in low-lying northern areas to grab what few possessions they could carry and flee their homes in search of higher ground.
And still the rains keep coming. In Bangladesh alone, floods have so far claimed the lives of 142 people, and impacted over 8.5 million.
In Beraberi, one of numerous island villages know as “chars” dotted along the Jamuna River, entire homes have been washed away, and crops and food supplies — including livestock — all but wiped out. When aid workers carrying relief parcels from the IFRC arrived by helicopter earlier this week, villagers described the rains as the “worst in living memory.”
“People were fearful they would soon begin to starve,” says Corinne Ambler, who was among the IFRC team who visited the village. “They are used to seasonal flooding but nothing to this degree, this is a different level — for miles around all you can see is water, the flooding has transformed the countryside.”
Read the full story + photos/video via CNN here