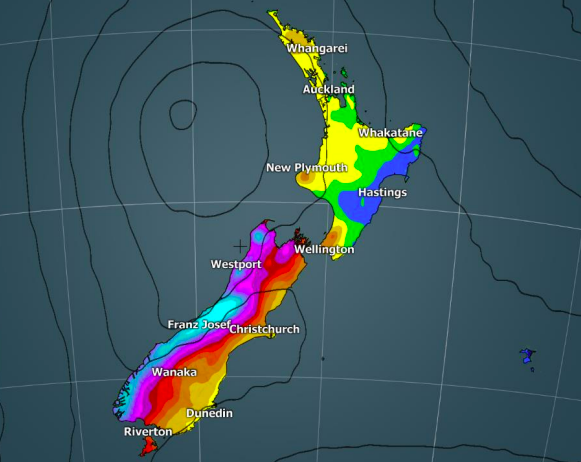 A southerly change for the second half of this week is about to move into the lower South Island and then linger for a few days bringing colder weather to the south, heavy rain to the west, heavy mountain snow in the Alps and gusty, warm, nor’westers further north.

TEMPERATURES:
The typical spring set up moves in overnight in Southland, Fiordland and South Westland and by noon will be pushing into Otago. At the exact same time it should remain dry and fairly sunny just up in Canterbury with some areas pushing 20 degrees on Wednesday afternoon, but drops by nearly 10 degrees on Thursday.

Friday looks to be the coldest day with Queenstown’s high looking to be in the mid to late single digits. There may be some snow in Queenstown, or close by, on Friday.  While Dunedin has a high of around 17 today Friday has a high of just 8 degrees with snow flurries possibly falling as low as 200m for a time. Heavier snow looks to be higher up though.

Generally speaking we’ve seen colder events but there may be more damp air mixed in with this southerly than the last one a couple of weeks ago. That means it will be tougher for new born stock but the good news is that milder conditions slowly return by the weekend.

Not everyone is cold.

As a result of the nor’westers and sunny weather further north a few places will be hitting the low 20s this week. In Hawke’s Bay highs in the low 20s are possible over Wednesday and Thursday while Northland and other northern regions will be around 20 or the late teens.

Colder air for northerners arrives later in the week – on Friday and across Saturday. Saturday may be the coldest day of the week for the North Island. Wellington has a high of just 11 on Saturday, down from 15s and 16s this week. Auckland has a high of around 14 or 15 on Saturday but the sun should be out making it feel warmer.

The southerly flow fades out this weekend as a large high rolls in.

For today, Tuesday, many areas continue the trend of warmer than average afternoons – but the flip side is that some also have cooler than average nights.

RAIN and SNOW:
Rain will be heaviest on the West Coast and this will fall as heavy snow higher up in the mountains. Some alpine highways are expected to get snow so be prepared.

Rainfall totals on the West Coast will be high enough for rainfall warnings with over 150mm likely over the next few days.

Snowfall totals are a little harder to lock in but at this stage 20 to 50cms in possible in the mountains. Snow doesn’t look likely to fall below a couple of hundred metres and is unlikely to settle below a few hundred metres due to mild soil temperatures and the fact the air temperatures will be below zero for the most part.

We haven’t really locked in Friday’s rainfall totals for the North Island but there will be some hit and miss soaking downpours which, for those who get them, will be helpful considering a number of North Island regions are now a little drier than average.

WIND
Cold southerlies kick in to the lower South Island on Wednesday but mild nor’westers remain for most others.

On Thursday a low deepens and grows along the western coastline and this will briefly stop the southerlies from spreading northwards and will lessen the effect of the nor’wester in the north.

By Friday the low crosses the North Island and the moment it shifts east that southerly returns – and returns nationwide now, not just hugging the lower South Island. Over Saturday the winds continue but ease in the west as high pressure builds.

On Sunday high pressure continues to grow – it’s an enormous high and is forecast to dominate in the Tasman Sea for all of next week and may be beyond. 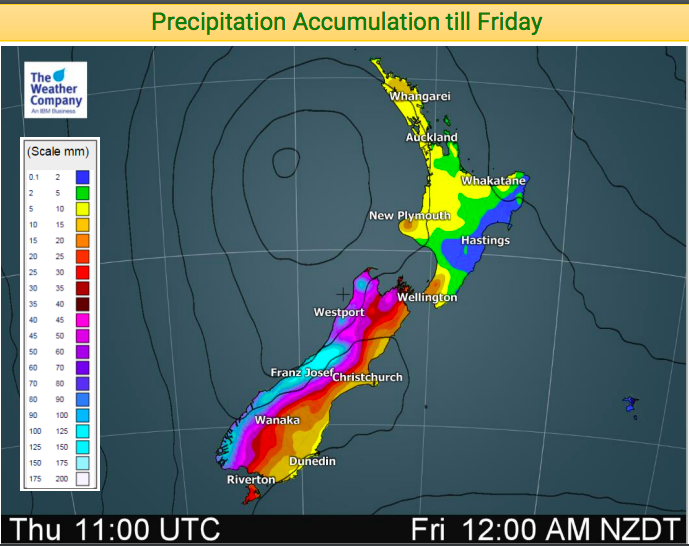 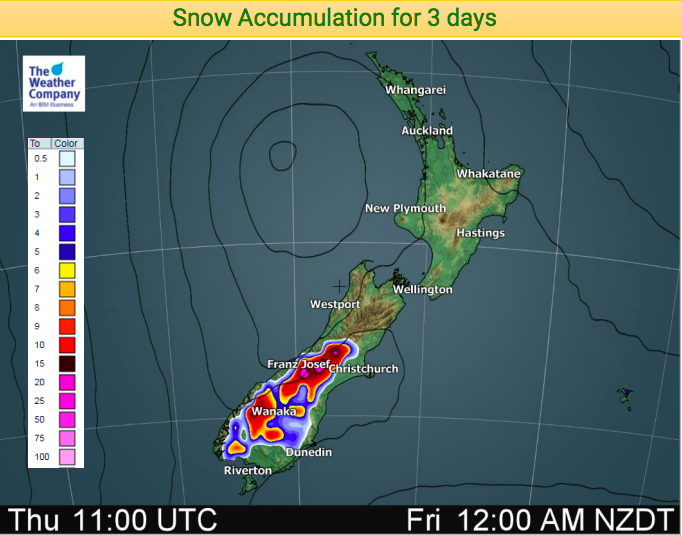 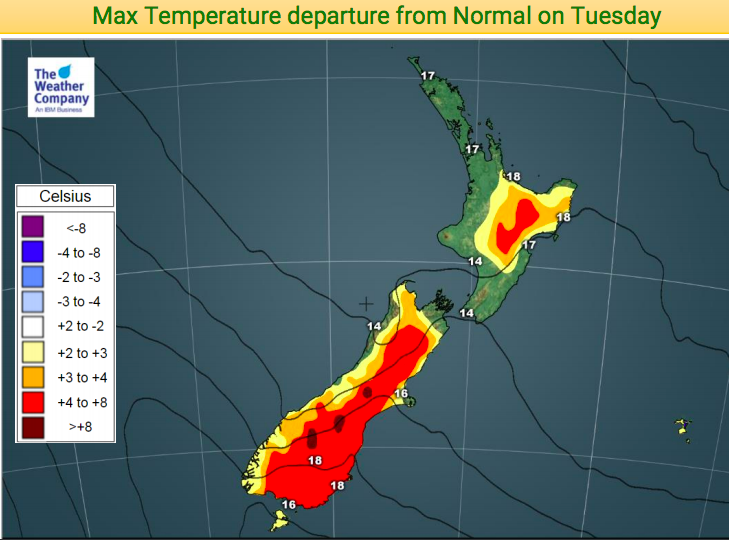 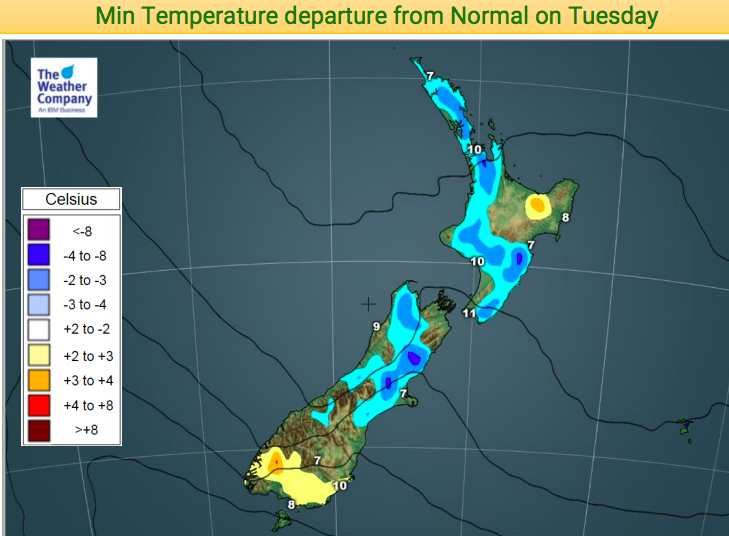 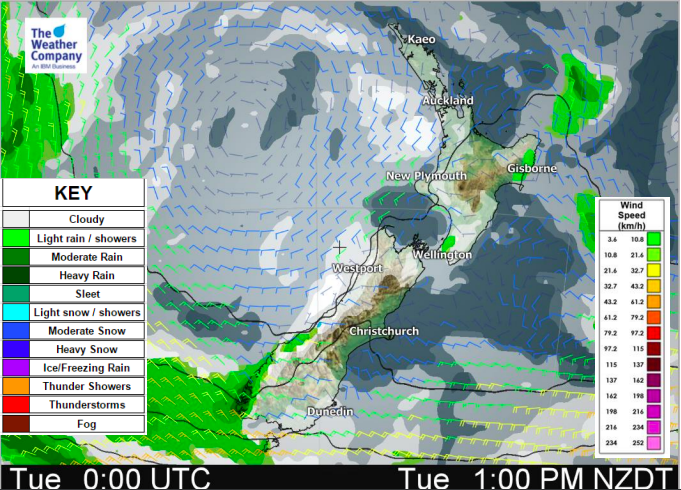 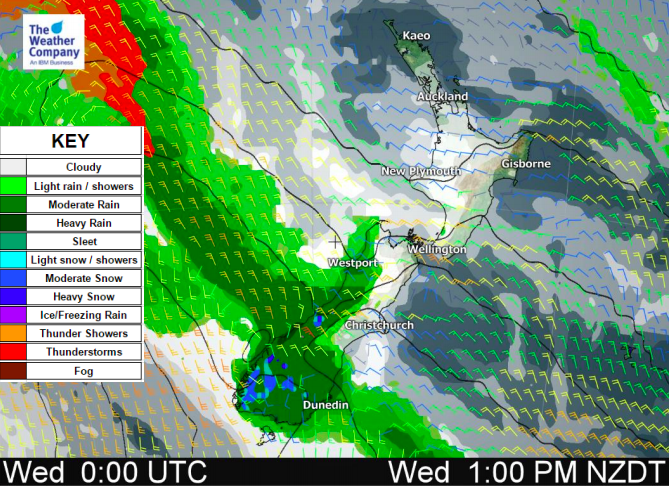