A settled Monday with high pressure 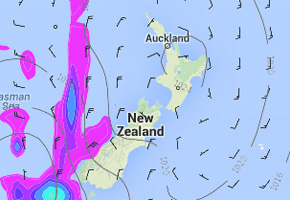 Monday is looking good for most with sunny weather and light winds. An anticyclone covers the North Island and is likely to give sunny weather to most places with light winds, that does mean a frosty start for many though especially inland. Just a few early showers are expected about Hawkes Bay and Gisborne then clearing to mostly sunny conditions with southerlies dying away.

For the South Island conditions about Nelson will be sunny with light winds, mostly sunny all along the east coast and about Southland too with light winds and some high cloud later in the day. Northwesterlies may pick up a little in inland areas from afternoon. Most will start the day fairly frosty.

Finally for the West Coast of the South Island expect cloud to increase from morning, a few showers move in during
the afternoon then rain in the evening with northwesterlies. The weather on the coast is caused by a front in the Tasman Sea that moves in as the day progresses.

Temperatures will be in the low to mid teens for all of the North Island although Wellington stays a little lower at 11. In the South Island highâ€™s will range from 11 to 13 degrees, high single figure marks for the Central Lakes District. And thatâ€™s it, thankfully nothing too long winded tonight.