Home > News > A price to pay this coming Friday for th...

A price to pay this coming Friday for the current warmth 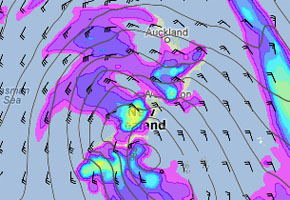 The warm and in some places humid weather that we are having today and will have for at least part of tomorrow can often come with a price tag in New Zealand, and this time the price is a cool southwesterly airflow developing from Friday.

Some will be happy to pay the price though to get rid of the muggy conditions up north and the very hot temperatures out east. Once the price hits there will still be a few repayments to be made till the weather finally settles out over the weekend thanks to a rewarding anticyclone coming in from the west.

So, the run down.

A depression will deepen west of the South Island tomorrow then cross over during the night to the eastern side, expect strong to gale northwesterly winds about Marlborough, Cook Strait and the east coast of the North Island as this process takes place. Strong southerly winds will develop about Southland and Otago overnight and heavy rain about eastern Bay Of Plenty clears overnight too. Expect muggy conditions to ease for the North Island in the later part of the day.

This depression will sit out east of the country for most of Friday pushing cool southerlies onto the South Island that will deliver some welcome rain for the east coast, Marlborough may only get a few showers however. The North Island has more westerly influenced weather with cloudy areas and showers out west, dry in the east. The showers in the west may be heavy and thundery between Taranaki and Kaptiti in the afternoon.

Saturday sees brisk southwesterlies move onto the North Island bringing some cloud and the odd shower out west, although sun will make an appearance too. The east may remain mostly dry although the risk of a shower is present. The South Island will be becoming settled with a southerly airflow dying during the day.

Sunday will have sunny settled weather for most with the anticyclone mentioned above having more influence by now. There is the chance that if there is enough moisture and temperatures get resonable in the afternoon, a shower or two is possible about inland parts of the North Island.

Certainly Auckland pays for any settled day when it occurs…