A powerful snow storm – but are we sure about it? 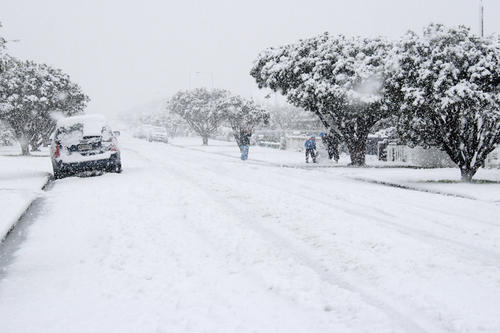 Head weather analyst Philip Duncan takes a very close look at the incoming snow storm, explaining how forecasters use models, and why predicting this possibly historic storm has been so tricky.

The southerly air flow that is about to form just south east of New Zealand is one of the most significant southerly outbreaks I have ever seen – and I’m sure many other forecasters are saying the same thing.  The air will be coming from directly off the Antarctic iceshelf where it’s -30 and colder.

All the lows and highs are joining forces to suck air up from the South Pole as far north as the sub-tropics.  The polar air will travel thousands of kilometres – the energy in this system is simply impressive.

But all week long you’ve heard us, and other forecasters, talk about computer models “not being in agreement” or “flip flopping”.  All weather forecasters rely on computer models to help produce forecasts – it’s part of the process.  We all use models from around the world.  Each model organisation uses a different formula to predict what will happen.  To be honest, it’s a bit like watching rugby.  We have certain models (or teams) that we rely on.   Over time you start to notice that some models are stronger in some areas than other ones…for example some are good at picking big lows well in advance, others are good at being more accurate short range.  Each model, just like our rugby teams, has their own strengths and weaknesses.

So every weather event that we face is like a new rugby game…and we’re trying very hard to predict the score well in advance by judging the team on their past successes and failures.

This week we had two reliable models – the All Blacks and the Wallabies to use our rugby analogy – but both were wanting to play the game very differently.  They had two different forecasts…but over time they have merged and are now both predicting a similar thing.  That’s what we look for as forecasters – we want the models to agree…for the teams to be playing the same game on the same field.  This week they weren’t playing the same game on the same field which is why we waited until Friday morning to make our first detailed snow prediction.

Modelling only makes up part of the equation, but it can be a big chunk…some days it can make up 80% of the overall forecast…other days less than 50%.  It’s always a battle of your own gut instinct, skills and experience verses what the models say.  And just like those rugby teams we admire so much, they don’t always get it right – and they can pull off some very unexpected shockers. And just like die hard rugby fans we also feel very let down when it doesnt go as it should have.

So, as forecasters, we can’t put all our eggs in one basket even if we think we have the most reliable modelling in the world.  Even the world’s best rugby team doesn’t always win the world cup.  As weather forecasters we try to win every game but sometimes we get it wrong.

So am I preparing myself in case this storm is a complete fizzer?  Maybe a little, yes.  But really I wanted to explain how it is that we come to making predictions – why all forecasters have a different take on things ( because we all rely on different rugby players and teams).

But I just asked a good question – will this be a complete fizzer?  I don’t think it will be – in fact some data today shows this to be a big snow storm.  All week we have thought the bulk of this nasty storm would be just to the east of New Zealand.  The nasty weather isn’t coming up the West Coast which is a sign that we are on the EDGE of this entire southerly blast.  It’s for this reason, being on the edge of it all, that makes it tricky to accurately forecast too far in advance.  A slight shift in these models can make for a complete non event or one of the most memorable snow storms of your lifetime.  Talk about a fine line between a brilliant forecast and the worst one you’ve ever read!

We always have to be cautious, and predict worst case scenarios.  But while the very worst of this storm looks likely to be to our south east, all the data and models and gut instincts are saying this will be a significant snow storm for some parts of New Zealand.  And all of these forecasts are made several days before the game even kicks off!  And speaking of that – kick off is in the deep south overnight tonight.  Half time looks likely to be Monday with final time Wednesday.

We are in Halswell Christchurch and has been snowing here with strong winds and no rain and is freezing,

think we are in for it big time.

Hi, we are between Rakaia and Methven on a farm, nearly seen it all today, sun 16C, calm, hail, sleet, sun again, and now freezing! BUT no snow yet. Looks like a shocker for tomorrow. See my weather station updating every 15min on twitter, @nzwalkabout

Hi, we are between Rakaia and Methven on a farm, seen it all today, sun 16C, calm, hail, sleet, sun again, and now freezing! BUT no snow yet. Looks like a shocker for tomorrow. See my weather station updating every 15min on twitter, @nzwalkabout

Hi there, We are in Central Southland. Covered in black clouds now and rain with strong-ish southerly winds. Temp has definitely dropped. We too hope this storm is a fizzer as we are calving. Luckily all the animals are now behind shelter and we just hope for the best.

Thanks for the great explanation. Do you have a probability for it occurring or is that just too much to ask? It’s great to have a more comprehensive forecast than the two liners we normally get fed.

I personally don’t think that it will eventuate since it relies on so many variables lining up in order for the great southern air flow to occur. One slight shift and the whole system will behave quite differently. Those double centred lows north of NZ are notorious for that. However, the winter woollies are close at hand and I haven’t been skiing yet so hoping for a bit more of a dump.

Hi Phil, lets hope its a doozy and not a fizzer. Well here in Levin at the moment its fluctuating between 15-16 dec har.dly any wind , its hard to believe we are in for some wintery weather
Cheers Phil Smith

Lets hope it IS a fizzer, those of us fortunate enough to live down south (not in Levin) have to deal with all the snow closing roads, schools, etc and making driving or doing anything very dangerous or impossible. spare a thought for those really affected by big snow dumps. fun for some, not for others…nice and sunny here now anyway.